The 15-year-old collected her award from Paralympic swim champion Liz Johnson in a ceremony at the Olympic Suite in John Lewis Stratford City, having been selected from a shortlist of the year’s most outstanding Panathletes.

Georgina is the seventh winner of the annual award, which celebrates some of the most inspirational individuals to compete at Panathlon each year, and was among twelve very proud young people from across three categories to be recognised at the ceremony.

Alongside the main award, Jamie Keat of St Augustine’s School in Hammersmith won the Panathlon Sporting Achievement Award, whilst Jack Gair from Great Baddow High School in Chelmsford was named the Panathlon Young Leader of the Year.

But it was the Barking & Dagenham star who came away with the day’s top award, much to her surprise and obvious delight.

“I’m over the moon,” said Georgina. “The award is a great honour. I was telling myself just this morning that I wasn’t going to get it. I didn’t believe it would happen but it did. As my mum said to me, just to be nominated for the award would be an honour, but to win it is amazing.” 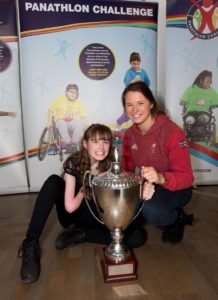 Inspired by Panathlon since joining Jo Richardson School in 2012, Georgina is a member of a local cycling club, drama group and young people’s group – where she is creating a website to showcase activities available to local young disabled people – and has just begun the challenge of completing her Bronze Duke of Edinburgh’s Award.

“Before I started Panathlon, I wouldn’t go even away from home on my own, but now I’ll do it easily,” added Georgina. “Panathlon has made me feel a lot more confident. I think it’s brilliant.”

The Year 10 student from Jo Richardson Community School, who has cerebral palsy, is a key member of the Barking & Dagenham team who finished second in the Panathlon London final at the Copper Box Arena in the Olympic Park in June – an event for which Georgina was chosen to read the Panathlon oath on behalf of all the competitors.

“I’m incredibly proud of Georgina,” said Amanda Saunderson, co-educator at Jo Richardson School. “She’s an amazing person to work with and an inspiration. She’s so resilient and everything she does she faces head on. I’m so proud of her and what she’s achieved.”

Georgina was joined at the awards by her parents and grandparents, who were delighted to share in her success and recognised the important role that Panathlon has played in Georgina’s development in recent years.

“I’m just so proud of her,” said Georgina’s mother Susan Hart. “When we got down to the last award to be given out, I thought ‘oh no, she’s not going to get anything’. I didn’t realise that it was for her, so I was totally shocked!”

“Panathlon has been great for Georgie. In junior school she had nothing like it but going to Jo Richardson School and getting involved in things like Panathlon, it’s opened doors for her. The confidence and determination that she’s got from it have been unreal.”

The Jack Petchey Foundation is Panathlon’s longest-serving supporter, investing over half a million pounds in the charity’s work in London and Essex over the last 11 years. The Jack Petchey Outstanding Achievement Award was first awarded in 2009 and it has grown in size and stature every year since. 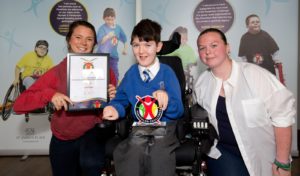 The Hassan Ahmed Sporting Achievement Award was introduced to the annual awards ceremony in 2012.

This year’s prize went to 10-year-old Jamie Keat in recognition of his selection for the Boccia England talent squad and for the vital role he played in helping his Hammersmith & Fulham Panathlon team qualify for their first ever London final this year.

“It feels amazing to be here and collect this award,” said Jamie (pictured left), who recently spent a weekend of intensive training with the Boccia England talent squad, alongside many people twice his age, taking his sporting achievement to the next level.

“Everybody is very proud of Jamie,” said his father Nick Keat. “He’s taken the opportunities that Panathlon has given him and has been able to apply that not only within Panathlon competition but beyond that. He’s doing well with his boccia to national level and bringing his competitive instinct to the fore.”

The awards ceremony proved a special occasion for Great Baddow High School in Chelmsford, who became the first ever school to provide all three nominees for a single award. 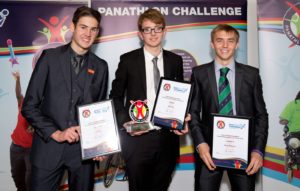 As a result, the school saw three of their students shortlisted for the Panathlon Young Leader of the Year award, which was won by Jack Gair, with his friends Steve Harrison and Lee Hart named as runners-up.

“I feel proud of myself,” said Jack, “but I also want to say congratulations to Steve and Lee for their nominations. I’m proud of them too.”

Jack, who is registered deaf, had an outstanding year as a Panathlon leader, by helping competitors in the water at the Panathlon swim finals in the aquatics centre – which meant that Jack had to operate with no hearing aid – and helping to run the first Essex deaf boccia event, where he could help other deaf Panathletes.

“It’s good to be a role model for other deaf children,” added Jack. “If they can see what I’ve done, they might think that they can learn to do the same in the future, to help children themselves.”

The Jack Petchey Foundation provides grants to programmes and projects that benefit young people aged 11 to 25. In the last 10 years, they have donated in excess of £100m to a wide range of organisations and schools, including over £500,000 to Panathlon.

Jack Petchey CBE said: “The young people giving their all to the Panathlon Challenge never cease to amaze me. The standards are exceptional and the way these young achievers do not let anything hold them back is nothing short of inspirational. A lesson in life to us all. We are delighted to have had such a long partnership with Panathlon and are immensely proud of what has been achieved.”

John Lewis Stratford City has been a firm supporter of Panathlon since the London 2012 Olympic and Paralympic Games, when it was selected by staff as one of four local charities to support. This is the fourth annual Jack Petchey Awards ceremony to be hosted in the store’s prestigious Olympic Suite.

Congratulations to all of our Jack Petchey award winners (listed below) while a selection of photos from the ceremony can be viewed in the photo gallery below.