Panathlon built on their successful pilot project for Girls Football this year, as we delivered new coaching and competitive opportunities involving 96 players and 69 leaders from 12 schools in London.

On Friday 10th June, Marjorie McClure School in Bromley hosted 6 schools from across South London. Sixty-one players took part in coaching and conpetition, with 37 leaders from 3 schools in support. This was designed to meet the demand for girls’ football identified in last years pilot project, and specificallty organised so that girls feel confident playing the game.

Emma O’Conner, Panathlon’s Football coach said, “I’ve noticed in a girls only environment, girls engage more with football. They feel more comfortable to try harder and are happy to learn without any pressure of the boys! Having only female leaders really supports the day and provides this environment. For many of the girls today from speaking to them, this is the first football coaching day they have been to. I hope to integrate some of the players into my female football clubs I’m involved with.”

Guy Wilkins, Head of Sport at Marjorie McClure school said, “We’ve had another great Panathlon experice today – it is all about extending an opportunity for the girls to be leaders, players or even to become coaches one day.” 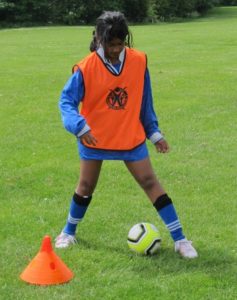 Panathlon extended the Girls Football program further this year with 4 competitive event days in total and a series of coaching sessions at two schools.

James Cresser from Samuel Rhodes School, reflected on the importance of having a girls only environment. “When I received the invite to this girls football day, I asked around at our school who wanted to attend. When our students realised it was a girls only, they were very keen.

This day enables them to play football in an environment that is less physcial than if the boys were also involved. Some of our female players have some decent skill, a day this helps them as well as other players who normally opt-out of playing football. It’s a good confidence builder and also a fun day out.”

In preparation, Panathlon setup coaching sessions for two SEN schools, Strathmore in Richmond and Cricket Green School in Merton at lunchtime for girls who have never played football previously. The coaching sessions were held once a week, over a seven weeks period. This coaching then fed into the Southfields Academy coaching day on 8th July.

Thank you to the Mayor of London and the Jack Petchey Foundation for funding our girls football project.