As the England women’s football team have been making history at the Women’s World Cup, Panathlon has been breaking new ground of its own this term with our first ever ‘girls only’ football skills days.

The pilot project is designed to meet a demand for girls’ football – which will no doubt increase following the Lionesses’ third place finish in Canada, their most successful ever World Cup – and to get more girls interested in and confident playing the game.

The day consisted of six rotation drills run by the Langdon leaders, including goal shooting, passing, dribbling & goalie catching. After lunch, the players and leaders split into 10 teams that rotated around five mini-pitches, giving all the players five games non-stop. 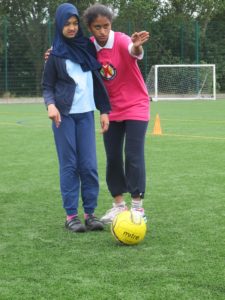 The Langdon leaders supported the event with great enthusiasm, getting thoroughly involved in the drills and adapting them to the needs of the players to make them more fun. They even got involved in the games, supporting the players and involving them in passing moves.

Danielle Smith, sports development officer at Barking & Dagenham, said: “The event was very good. I liked the fact that the girls got to learn skills before playing a match. We can’t wait to participate again next year.”

The leaders worked in pairs with three girls each, taking them through dribbling, passing and shooting skills. It was enjoyable to see the leader’s creativity, changing and adapting the drills to relate to the girls’ ability and to make them more fun to play. There were many variations of the games, the most amusing involving star jumps and the sausages and mash exercise!

Games again took centre-stage after lunch, with 18 matches of 10 minutes each spread across three pitches, involving nine five-a-side teams with three Panathletes and two leaders in each team. In most of the games the leaders chose only to assist rather than to score themselves, which added to the fun, and some of the goals scored were glorious!

So, just as the England team have inspired girls all over the country to lace up their football boots, so Panathlon has encouraged more girls to get involved in the national game with this popular pilot project.

By involving just female leaders to work with female players, the sessions were a notable success and received positive feedback from teachers, who commented that players were much more involved than in usual PE lessons.

Jenny McDonagh, a teacher at Samuel Rhodes School, said that one of her pupil’s involvement was the first time she’d done any PE all year and that, after some initial resistance, she was really starting to get into it.

Dan O’Brien of Woodfield School said: “Thanks for hosting the girls’ football day. Our girls really enjoyed it. I also thought the leaders were great; they showed terrific confidence and leadership skills when delivering the skills sessions.”

Sport England have been saying ‘This Girl Can’ in recent months and now Panathlon and its female footballers are proving them right. These girls most certainly can.

Take a look at some of the action from our first ever girls’ football skills sessions in the photo gallery (left).

With thanks to the Mayor of London for enabling us to get this new project off the ground.