The victors from Thornton Cleveleys scored 84 points to edge out their neighbours and fierce rivals Park School, from Blackpool, who finished third on 66. The Ashley School from Lowestoft in Suffolk finished in silver medal position on 72.

All eight teams had qualified through their regional finals and travelled from all corners of England for the inaugural event. Priory Woods came all the way from Middlesbrough with other regional event winners coming from Kent, Gloucester, London and Birmingham.

Some competing teams paid to stay overnight, with champions Great Arley and Priory Woods, from Teesside, both staying at an activity centre in Essex and third-placed Park stopping at a nearby hotel in Stratford.

Amanda Johnstone, Assistant Head at triumphant Great Arley, commented: “I’m sure our Deputy Head Mrs Rowley, who has trained this squad, will be really proud of them.

“We got waved off yesterday by the whole school. It means so much to them and is so good for their self-esteem because they go to a special needs school. 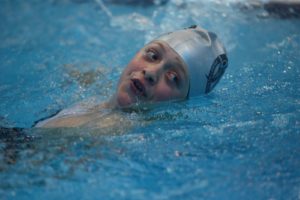 “To be able to come somewhere like this and be able to say, ‘I’ve swum in the Olympic pool’ means so much to them and to their parents. We are super proud of them.”

With a gold medal hanging proudly round her neck, Emily Lowe, 11, said: “It makes us really happy that we get this opportunity to swim in this pool. Seeing everyone enjoy themselves so much was amazing.”

Her team-mate Kieran Rutter, 13, added: “I feel proud to be here in this venue. It shows if you work really hard you can earn experiences and medals like this. Put your head down, don’t worry about anyone else, and just head for the gold!”

Emma Louise, 12, of the second-placed Ashley School said: “When my mum and dad see this medal they will probably start crying!”

Ashley School teacher Neil Godbold said just taking part was a “massive honour” for his students: “Competing in Panathlon’s competitions just gets better and better every year. The kids get a lot of fulfilment and enjoyment out of it. We will be doing an assembly about Panathlon next week with these guys on the stage, which will boost their confidence even further.”

Great Arley and Park School are situated just seven miles from each other and despite losing out to their rivals, Park teacher Stuart Johnson said: “It has been a fantastic day. Congratulations to Great Arley. It’s great to see the trophy going back to Lancashire, even if it is to our rivals, but we’re still over the moon with our pupils and how they’ve performed.”

As for rumours started by fellow staff members that they would be letting the tyres down on the Great Arley team bus, he replied: “No comment!” 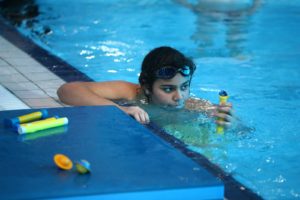 Beacon School from Folkestone in Kent finished fourth on 53 points and teacher Craig Rankin commented: “Just to be in this venue is such an experience for our children. I think we were definitely the loudest team! They’re great role models for the rest of the pupils back at school due to their hard work and determination. Panathlon events develop teamwork, resilience and shows them that you get out what you put in.”

Part of the New Oscott team from Birmingham were Neve Allen and Harry Morgan, winners of Panathlon’s West Midlands Outstanding Achiever awards for the past two years.

“Being here makes me feel so grateful,” said Harry. “Nobody gets left out at Panathlon, everyone gets a medal. I’m going to put this medal with my 10 others on my window ledge. Eight are from Panathlon and two from sports day.”

Neve’s father Jason Allen reflected: “She loves the spirit of Panathlon. She should have been doing a first aid course today, but it was a no-brainer to choose this!” 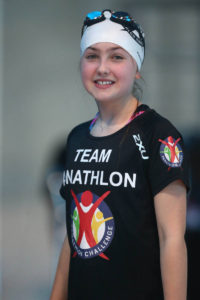 Neve (pictured right), 11, has congenital short left femur and hip dysplasia, but her physical disability never holds her back. She trains with Coventry Godiva Harriers in wheelchair racing alongside luminaries such as Hannah Cockcroft and is preparing for the mini London Marathon in April, in which she finished third last year in the U14s, despite being only 10 at the time. Her dream is to be a Paralympian.

“Panathlon has played a massive part in Neve’s progression. She takes part in everything they put on. It has been a tremendous opportunity for her. Two years ago she was in Great Ormond Street Hospital and was really depressed. Since this came along she has not stopped flying.”

Neve herself said: “I love Panathlon’s competitions. Swimming here has been so special and now I want to get gold in the mini London Marathon. That’s my next target.”

Pupils from Dinglewell Junior School in Gloucester, who qualified by winning the West of England qualifier in June, were ecstatic to finish in sixth place. One pupil, on entering the arena from the changing rooms, summed up the sense of awe that many felt about the venue by saying: “Ooh my God! Shut the front door!”

Sebastian Gloveridge, 12, said: “It is unreal and outstanding to be here!” His team-mate Jake Hamblett, 11, said: “It took us four hours to get here but it has been so worth it! It’s the chance of a lifetime.” 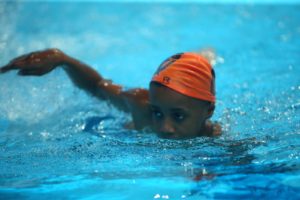 One competitor with complex needs from seventh-placed Priory Woods School in Middlesbrough, 11-year-old Ibrahim Aruna (pictured left), had never been away from home before or taken part in a competition.

His teacher Claire Francis said: “He’s just taken it all in his stride and he’s absolutely loved it. Panathlon builds their confidence and they can’t wait to show off their medals back at school.”

The event’s nine Young Leaders were part of the Leadership Academy at Great Baddow High School in Chelmsford. “The Panathlon is one of their favourite things to do as part of their course,” said their teacher Katie Davis. “They have had an absolute ball and they’ve learned the officiating side of things but also how they can work together to help people access swimming in lots of different ways.”

The inaugural Panathlon National U14 Swimming Final was the last of three days of activity at the world famous London Aquatics Centre, host of the London 2012 Olympic and Paralympic Games.

A gallery of photos from today’s event can be seen here.

Today’s National U-14 championships were only possible thanks to the support of our funders St. James’s Place Charitable Foundation as well as GLL, the UK’s largest leisure charitable social enterprise.