Great Arley School proved their prowess in the pool once again by taking gold in the Panathlon U18 National Swimming Final at the London Aquatic Centre.

The Lancashire school, winners of our inaugural Under-14 National Final at the same London 2012 venue 18 months ago, added the U18 title to their collection after amassing 78.5 points to beat Whitefields School from Waltham Forest, east London, by a mere two points.

Defending champions Moor House from Oxted, Surrey, finished with bronze medals on 70.5 with last year’s runners-up Priory School just missing out on the podium in fourth.

Great Arley’s preparations for the event were extensive, with regular training at Fleetwood Swimming baths, who sponsor their team, and further financial help from local firm 3D CAD 4U helping to fund transport and accommodation for their three-day trip to London. 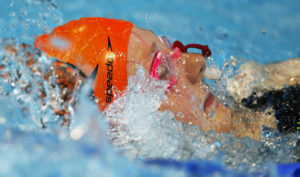 “We’re going out later to celebrate – we might go somewhere a bit nicer now we’ve won!” said teacher Mike Spence. “To win this is absolutely brilliant for this team. They have all just tried so hard. We’ve got our last win written on a banner outside school. We’re going to need a new one now!

“These kids just really want to be in our swimming team because of how they’ve been inspired by Panathlon. One of the boys has joined a swimming club because of this. It’s great for the school as well. They are all just so pleased to be here.”

A beaming Kieran Rutter, 15, said: “It’s been a pleasure being here, I am so excited. I’m just really proud to achieve something that we’ve wanted to achieve for a long time. We practiced loads and we’ve done it!” 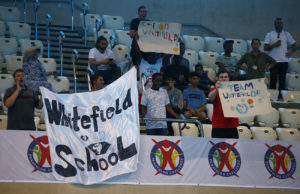 Second-placed Whitefields were roared on by a large contingent of vocal supporters waving specially-made banners. For three of the team it was their last ever Panathlon event after several years of participating in swimming, multisport and football competition.

“Today is a big celebration for them,” said teacher Maria Papazoglou. “Just being able to leave school for them is a huge thing, let alone compete in a venue like this.

“Competing in Panathlon events over the years really helps us build up relationships with our students with behavioural issues. One of my students now goes every Thursday with his carer to do swimming lessons and it really reduces his anxiety. Being here today is a big thing for him.”

Hayley Chilcott, swimming teacher at third-placed Moor House, from Oxted in Surrey, described the effect that winning this title had on their students last year: “It did wonders for their self-confidence. It was inspiring and they were very proud when they came back to school. They all took the mickey out of me because I was crying! It does inspire everybody to want to swim more, in and out of school.

“Panathlon is amazing for us as a school because of all the red tape and the focus on academic study does limit our chance of playing competitive sport. The competitiveness is important, and the chance to do so against children of similar abilities is very precious.” 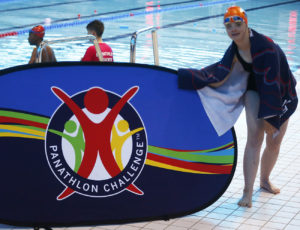 The impact on individual competitors was exemplifed by 15-year-old Helen Thompson (pictured right) of the seventh-placed Market Field School from Essex.

When she started at the school just four years ago she could not swim, but competing in Panathlon competitions has played a big part in her falling in love with the sport.

She progressed at such a rate that she soon joined the Phoenix Swimming Club for people with disabilities and now swims for Colchester SC. Last summer she was part of the Great Britain team that competed in the Down Syndrome World Swimming Championships in Nova Scotia, Canada. She won a silver and a bronze in the 25m breaststroke and butterfly respectively.

“Helen has come from nowhere,” said the school’s Autistic Classroom Manager, Moira Barker. “When Helen first started at school she couldn’t really swim and now she represents the country! Panathlon has really built up her experience of not just swimming, but competitive swimming.”

Helen’s team-mate and friend, 17-year-old Imogen Cole, added: “I really enjoy Panathlon and you get so much out of it. It allows me to improve and learn new skills and the competitive side is really important.” 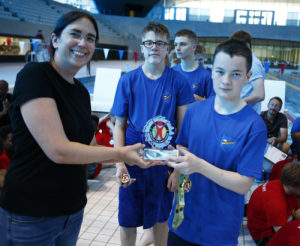 The National U18 Final was made possible by the support of Pentland Brands, whose recent £45,000 three-year partnership helps fund our swimming activity. Speedo is one of the brands in Pentland’s portfolio and they supplied backpacks and branded swim caps for all 67 competitors today, as well as goggles for the winning team.

“It’s fantastic for these guys to be able to say they reached and competed in a National Final – and to be at the Olympic Park is unreal. For young people who wouldn’t necessarily get the chance to follow their sporting dreams to come here I think is really powerful.

“It’s a privilege to support the expansion of Panathlon’s swimming programme. For children with disabilities, swimming can be quite hard to get involved with due to lack of opportunities and facilities. This has a real impact and to witness it first-hand today is inspiring.” 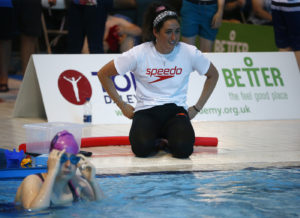 Two Speedo employees, Jonny Higham and Georgia Hohmann, formed part of the team of volunteer leaders along with students from Richard Hale School in Hertford. Georgia (pictured right) is a two-time British and Commonwealth Youth swimmer, was inspired by her first glimpse of Panathlon in action.

“It’s crazy to call this a day’s work!” she said. “It’s been so much fun and to see the smiles on the kids’ faces and how determined and talented they are has been amazing.”

The final word has to go to 11-year-old Bower Grove pupil Ronnie Oliver, whose love of the Olympics made his first visit to Stratford to see the London 2012 venue an awe-inspiring experience.

“I’ve never been here before and I’ve always wanted to come,” he said. “It’s an honour. It’s really important to me. It’s one of the best known aqua centres in the whole world because of 2012. I’ve always wanted to be in here and my life is now complete! I just want to stay here forever.”