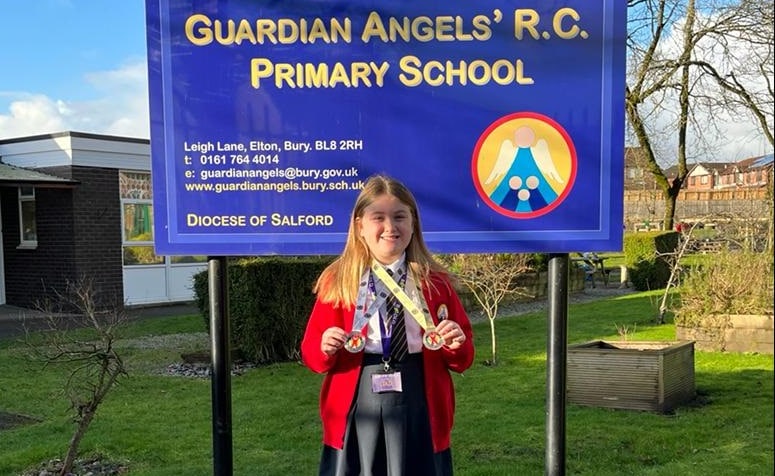 Maeve’s DLD means she struggles with reading, writing and communication but thanks to support from Guardian Angels staff and her classmates, she is happy, confident and thriving.

Ten-year-old Maeve derived plenty of self-belief from being part of the Guardian Angels team who came second at our recent Primary Swimming gala with Bury School Games. By her own admission she had “a bit of a meltdown” before getting into the water, but plucked up courage to take part and went home with a silver medal.

She had previously won gold at our Bury Primary Multiskills competition and her next challenge will be representing Bury in Panathlon’s Greater Manchester boccia pathway finals in Bolton. If her team win there, they will qualify for the Panathlon North West Final in Liverpool.

In March, Panathlon’s patron, the multi-parasport international Freya Levy, will hold a Q&A with Guardian Angels’ Key Stage 2 pupils to inspire them and share her story.

“Panathlon has definitely opened doors, broken down barriers and allowed children like Maeve to thrive in a safe and competitive environment,” said Louise Shaw, Guardian Angels PE Lead. “It creates an opportunity for sporting success for children who might not ordinarily get that platform. It is wonderful.”

Supported by her class teacher Mrs Wilson (who is also the school’s SENCO), Maeve uses an iPad to record her responses to questions verbally. She does story boards or acts out her thoughts to bring them to life by alternative methods. “We set things up so her talents shine in other ways,” said Mrs Wilson.

On National DLD Awareness Day, Maeve spoke to her class and was able to tell them how DLD made her feel and about her day-to-day experiences. She was then taken out of class and her peers produced fact sheets about their new-found understanding of Maeve’s condition.

“When I came back into class and saw what they had done, I cried my eyes out,” said Maeve. “It was really nice. It made me feel really loved. No-one has made me feel this important and proud before.”

MP for Bury North, James Daly, visited the school and Maeve told him all about her difficulties with DLD and how the school support her learning. He was so impressed that he invited her to 10, Downing Street in April to share her story and raise awareness of the impairment.

Executive Head teacher Jo Davies said: “The way Maeve handled James Daly was incredible! She talked so openly about DLD and its impact on her. She also talks openly to her friends so they understand how she learns in different ways.”

Maeve said: “My DLD makes me feel different and unique. It makes me feel sad sometimes but I have loads of friends who help me out. I love going out with my friends, doing Tik Tok dances and playing with my dog and turtle.”

Maeve’s mum Hazel Gooding said: “It takes Maeve a while to get a full sentence out, so we all have to be aware and give her the time to finish what she’s trying to say. She has other siblings who always finish her sentences for her!

“She is hilarious and she is dealing with it really, really well. It has taken us a few years to get our heads around it and realise how DLD affects communication, reading and writing. It was Mrs Doyle, the Specialist Speech and Language teacher who recognised the DLD and that has really, really helped her. She doesn’t know how special she is, she really doesn’t!”

Executive Head Teacher Mrs Davies couldn’t disguise her affection for Maeve and her admiration for her achievements.

“She is an absolute star and represents all that is good and inclusive about Guardian Angels,” she said. “We have been proactive in training our staff about DLD. It’s not something that is well known about so hopefully Maeve’s visit to London will highlight it more.

“For Maeve and every child who enters a Panathlon event, it just brings them to life. For children like Maeve who wouldn’t necessarily show an interest in sport, it gives them a precious opportunity to represent the school. Maeve has brought back medals galore!

“We’ve found that children who go to Panathlon events come back and want to try out more sports. A lot more children have now got involved in our extra-curricular sports clubs as a result of its effect on them.”

Mrs Shaw added: “Our motto is, ‘Every child is a winner’ and that’s what we see in Panathlon. It gives every child at every level an opportunity to succeed and they always come back buzzing. They are so thrilled to come up in assembly and enjoy a huge celebration. It’s their time to shine and be part of a team and rightly so.”

Panathlon’s Chief Operating Officer, Tony Waymouth, added: “Maeve and Guardian Angels are perfect examples of how Panathlon can impact so positively on individuals and the school environment. Maeve has shown that once the door has opened a wider world awaits.”