The north London students came out on top as over 100 disabled youngsters from eight London boroughs battled it out at at Powerleague Wembley in the shadow of national stadium’s famous arch.

Haringey clinched victory by the narrowest of margins after the combined results from the under-13s and under-16s competitions saw them finish level in the overall standings with Enfield – the defending champions securing the title by virtue of a better head-to-head record between the sides.

“It feels absolutely fantastic,” Lucas Neocleous, special needs assistant and football coach at Riverside School. “I couldn’t believe it when we heard our name. The under-13s really pulled it out the bag for us this year. I’m really proud of them.”

Haringey’s under-13s team won their competition with Enfield finishing in third – a result that was reversed in the under-16s competition – but the side’s 3-0 win over their north London rivals was the deciding factor in the overall shake-up after the other two matches between the boroughs finished level. 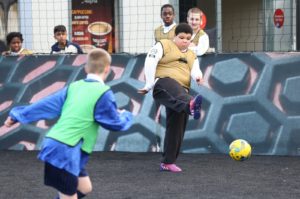 “I really like Panathlon and it’s exciting to be representing the school. It’s great to play lots of football against hard teams like today.”

The Panathlon Football Cup finals brought together the best eight teams from Panathlon’s London-wide football programme, which gives severely disabled young people the chance to compete at football – an opportunity that otherwise would not exist for many of them.

All eight finalists reached the showpiece Wembley finals via regional qualifiers in a tournament that involved over 300 players from 22 London boroughs.

Football was introduced to the London Panathlon programme in 2008, targeting players not able to access football elsewhere, including young people with severe learning difficulties, visual impairments and Powerchair users, involving over 500 disabled footballers each year.

Alongside the cut and thrust of the football finals, Panathlon football coaches carried out a coaching session for the next generation of football players, many of whom don’t have the opportunity to play football at school.

One of the coaches was Panathlon Schools Ambassador Thomas Clements – a former competitor from Marjorie McClure School in Bromley and now qualified FA Level Two coach. Thomas proved an inspiration to the young footballers, particularly those who rely on a walking aid, as he does.

Thomas said: “The thing I’ve enjoyed most about today is there have been more people with walking frames than usual. Being a walker-user myself, it’s good seeing their faces as they realise I’m the coach. You do a little demonstration for them, not too hard, then they run through it. So long as you praise them at the end, do a little high five or praise them when they score, it’s good.”

Panathlon’s football coaching aims to encourage players not yet comfortable or confident enough to play in a competitive match, whilst this summer’s first ever ‘girls only’ football skills days – run exclusively by female coaches – proved a resounding success in encouraging more disabled girls to get involved in the beautiful game.

Plans are now underway for a Panathlon girls’ football team, with the aim of having them compete in a community league in London by the 2016/17 season.

Last week’s plate competition was won by Islington, who went undefeated at both under-13s and under-16s level. A single goal was enough for the team from Samuel Rhodes School to defeat last season’s plate winners Hammersmith & Fulham in both age groups, with the reigning champions having to settle for overall silver this year.

Barking & Dagenham edged out Harrow to third place overall, by virtue of a 6-4 aggregate win in their head-to-head matches – with one win apiece – after the teams finished level in the overall standings.

It was a action all the way, with 253 goals scored across 45 matches, as 102 footballers from the eight teams who finished third and fourth in qualifying came together at Powerleague Wembley, 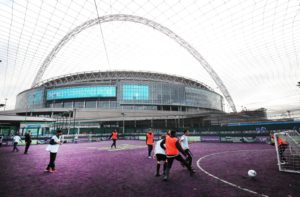 Panathlon’s football programme is funded by the Jack Petchey Foundation and the Mayor of London.