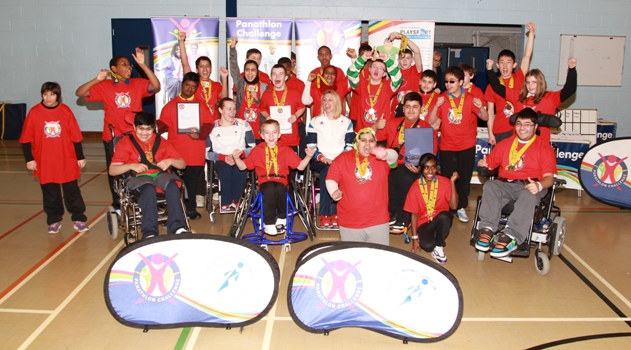 The West London Panathlon Final took place today at Featherstone High School in Ealing, with teams from Harrow, Hammermith & Fulham, Ealing and Hillingdon. 15 schools in total contributed 102 disabled children who took part in the 6 sports, to see who would represent the “West” in the London wide Final on June 19th.

Harrow powered to another victory, with an amazing 68 points out of 70 winning, Boccia, Table Cricket, Kurling, Polybat, and Athletics field and Races.

Janine Edwards from Whitmore school Harrow said, “We had a fantastic day today and are delighted to be going home in first places again. Hard work has paid off and we are back in the London Final in June.”

Hillingdon had their best placing ever with 2nd in the West Final, and the teams of Ealing and Hammersmith & Fulham were tied for 3rd with 40 points.

Paralympians Helen Turner and Louise Sugden were presenting medals to successful Panathletes and inspired the children with tales of London 2012.