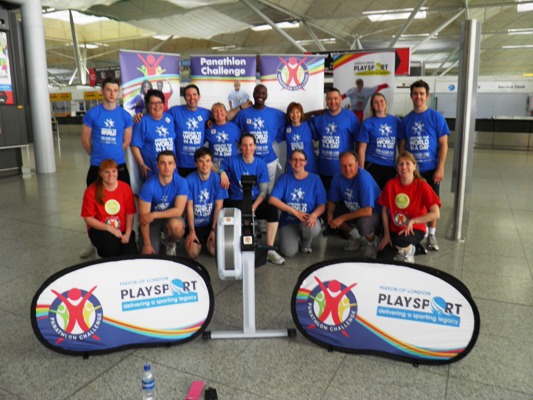 Hilton London Stansted Airport recently helped to raise over £10,000 for local charity the Panathlon Challenge during two spectacular fundraising events: the Panathlon Ball and Hilton in the Community Foundation’s Around the World in a Day.

On May 12th Panathlon hosted its first ever ball at Hilton London Stansted Airport, which featured a four course dinner, raffle prizes and a silent as well as live auction. The evening, which was MC’d by former cricketer and Sky Sports journalist Dave Fulton, also included an inspirational speech by Danny Crates, GB Paralympic gold medalist and Panathlon sporting patron, and was attended by Giles Long MBE , chair of the Panathlon Charity and triple GB Paralympic gold medalist, as well as Team GB Paralympic hopefuls for the 2012 London Paralympic Games. Auction prizes included numerous trips with generous stays offered by Hilton Worldwide hotels across the globe.

Robert Watts, Hotel Manager, Hilton London Stansted Airport, said, “It was a truly fantastic evening. Guests had such a wonderful time, laughed and danced throughout the night and were able to learn more about the important work we do together to make a difference in our community.” A fantastic £16,000 was raised from the event, which will equally be shared between the Panathlon Challenge and Hilton in the Community Foundation , the official charity of Hilton Worldwide in Europe.

On May 20th Hilton London Stansted Airport once again chose the Panathlon Challenge to be the recipient of its fundraising for the annual Around the World in a Day event. The fundraiser saw Hilton Worldwide team members, charity partners and the public working together in more than 100 hotels in eleven countries across Europe.

Since it was founded in 2007, the Around the World in a Day event has raised over £360,000 collectively in support of 226 different children’s charities, schools and good causes.