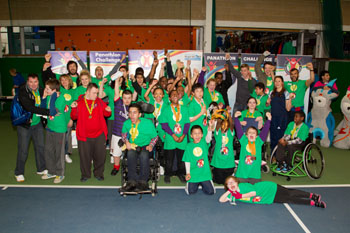 Children from three Islington schools have led the borough to their first ever Panathlon London Final following a thrilling day of action at the Westway Sports Centre.

It was a rare success for Islington, who competed in the first ever Panathlon event in 1999 but have never before qualified for the All London Final, which takes place this year on 19 June.

Marianne Sharpe, from Samuel Rhodes School said: “It’s so exciting. It’s Islington’s first time in a London Final, which means that we’re in the top five teams in London. It’s a phenomenal achievement for us all. The kids have loved it.”

Islington won the multi-sport contest on the day’s very last event – a first place finish in the athletics races to edge a consistently strong Camden side into second place. Victories for Lambeth in the table cricket, kurling and athletics field events helped them to third spot, narrowly ahead of Wandsworth, who won first place in both boccia and polybat.

Johnson, winner of a gold, silver and bronze medal in the SB6 100m Breaststroke over the last three Paralympic Games, said: I always love to come down to Panathlon and see the children here. There is so much going on and they get so much out of it. The best thing is that the kids get to play competitive sport. Sport teaches everybody so much. You’ll find some people have come here today quite introvert, but they’ll leave as the captain of their group. Panathlon makes it accessible for these children to obtain those kinds of skills and gives them opportunities that they wouldn’t otherwise get.”

Kate Hoey MP, Commissioner for Sport for the Mayor of London, said: “I’ve tried to come every year to a Panathlon event and this year it just seems bigger and better than ever. Without Panathlon, many of these children would not get a chance to take part in any sort of sporting activity.”

Islington go through with Enfield to the London Final on June 19th, and will be joined by 3 more regional winners over the next 3 weeks.