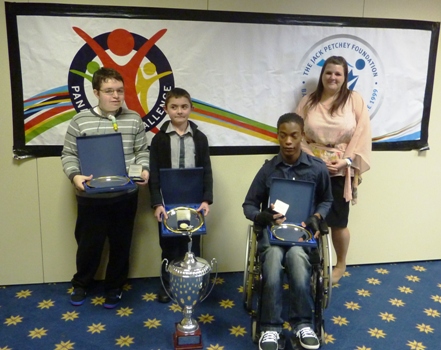 The nominated individuals needed to demonstrate how they have triumphed over adversity and made outstanding contributions to their schools through their own personal achievements.

The overall winner, Zach Livings, received the prestigious Jack Petchey Outstanding Achievement Award trophy, a coaching cheque for £750 and an inspiring visit by a Paralympian to his school.

Panathlon has additionally nominated each of the three shortlisted candidates to be an Olympic Torchbearer in 2012.

Giles Long MBE, Panathlon Chair said,” Panathlon Challenge is a fantastic competition for young disabled people, it inspires the participants to try their best and develop their sporting activities. The Jack Petchey Outstanding Achievement Award allows us to recognise the extra special efforts and determination that some competitors have demonstrated, improving their own development and that of their peers and school.“

Trudy Kilcullen, Chief Operations Officer for The Jack Petchey Foundation, which has invested £50,000 in Panathlon in London and Essex in 2011, said.” These young winners are an inspiration to all of us. We are happy to support Panathlon in enabling them to participate fully in competitive sports designed to suit their needs and they have shown courage, drive and the capacity to overcome adversity. They are great role models and we look forward to seeing even more disabled young people becoming coaches and sports leaders in the future.”

“In our first ever Panathlon Challenge in 2009, Zack was taking part in the manual wheelchair race and fell over fairly badly. He suffers from Duchenne Muscular Dystrophy and was too weak to break his fall safely. Despite his injury on that day, the cheers form the crowds for him to finish the race got him up and going again. He finished the race and won everyone’s heart that day for his effort.

Since that day Zack has been training hard and is a key player on our team each year for table cricket and relays. He also however has had a recent decline in his physical ability due to his DMD. Despite him understanding his condition and seeing his skills lessen, Zack has managed to continue to keep a positive outlook on sports and the Panathlon.

He now has an electric wheelchair and has helped us win the electric wheelchair relay and also place well in the slalom event. He continues to play table cricket as well and he is happier than ever with his performance. I think he shows great character for getting up and carrying on back in 2009 and when looking at his DMD and how it is and will further affect him, he is still getting up and carrying on each day of his life. ”

I have never met anybody who is as passionate about the Panathlon as Ryan. He constantly asks when the next competition is and never misses any training for the event. Ryan has a serious long-term illness. He has a tracheotomy and requires oxygen on hand at all times. He has a full time nurse who deals with all his care needs, and is always with him.

Ryan spends a lot of time at hospital attending medical appointments and he recently told his consultant that he would not be able to attend any appointments if they clashed with any sporting events! Sadly he missed one competition when he was in hospital having alterations made to his tracheotomy. However, since then Ryan has been able to use his new louder voice to cheer on his teammates at every competition.

Ryan can’t wait to take part in any of the Panathlon events but he particularly shines in Polybat, winning gold in the last competition. It would be such a fantastic achievement for Ryan to receive this award and a moment in his life, I know he will never forget!

Shaun is a person who always strives to do his best in all walks of life. At 13years of age he is a true ambassador for sport. Shaun was diagnosed with cerebral palsy and is mobile by using a rollator or by propelling himself in his wheelchair. As a young child he was an intensely shy person and would not speak out. Over the years he has demonstrated a fierce determination to succeed in all that he does, inspiring others around him to achieve their goals.

Through his love of sport Shaun has gained hugely in confidence and now speaks, in a quiet and thoughtful manner. The confidence Shaun has gained by participating in the Panathlon activities has been immense – he has gone on to represent his school and the London Borough of Croydon in Boccia, reaching the National Finals in Nottingham, coming 7th overall. In athletics he has participated in The Panathlon Challenge, reaching the London Finals. This has given him the courage to take on the challenge of training, entering and completing the London wheelchair mini marathon, 3 years running, coming 3rd in his age group.

This in turn has improved his feeling of self-confidence to participate in a Young Leaders Course. He is now organising and running lunchtime sporting activities in school, which has a positive effect on the pupils who participate.

Shaun’s quiet determination and inner strength is truly an inspiration to all who come into contact with him. I have no hesitation in nominating him for The Jack Petchey Outstanding Achievement Award.