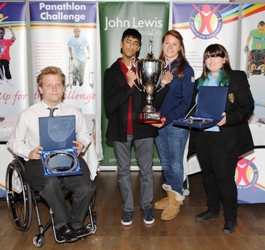 We were delighted that Jack Petchey OBE and triple Paralympic medallist, Liz Johnson presented the short-listed nominees with framed certificates and then announced the 3 Outstanding Achievers, and awarded them trophies for their Outstanding Achievements.

3rd place was Grant Rose from All Saints School in Barking, 2nd place was Elisha Butcher from Eastbrook School in Dagenham but the winner was Mahfuz Ahmad from Oak Lodge School for the Deaf in Wandsworth.