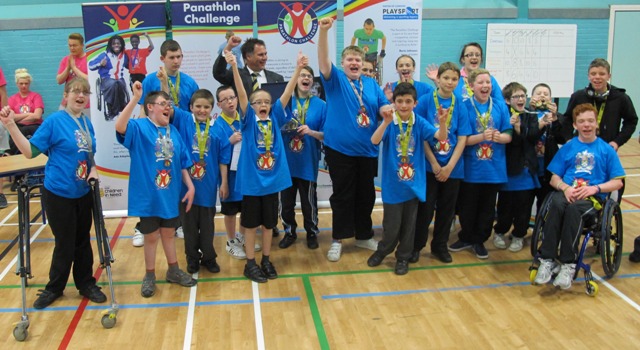 6 Schools took part in the West Kent Panathlon today at The Malling School which hosted its 10th Panathlon competition – the first one dating back to 2008.

Once again Dartford proved to be the team to beat with wins in Table Cricket, Kurling and Athletics Races which sneaked them to the win by the narrowist of margins. In second place was Malling & Sevenoaks with 50 points having won Boccia and Polybat.
In 3rd was Tonbridge & West Kent and in 4th place was Gravesham. See Results section for a full break down

Steve Devereux, from Milestone School, part of the Dartford Team said, “Dartford had excellent day, it was a well organised competition and the students really enjoyed themselves. There was great team work show by the students at both our schools and we’re looking forward to the Final.”

The Young Leaders delivering the sports were from The Malling School and were excellent. See their Blog here

Today’s competition was funded by the Charles Harris Academy, for the 3rd year in succession. A huge thanks to Charles for investing in our charity so we can pass on the benefits to the young people of Kent !