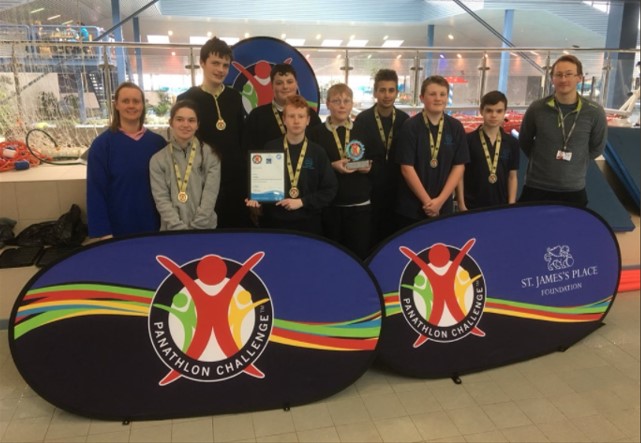 The sixth annual Panathlon South Suffolk Swim Gala, which took place at Crown Pools in Ipswich saw teams from 8 schools across South Suffolk take to the water in two competitions – the Panathlon Swim Challenge and the Discovery Swim Challenge – which combined individual events and fun team challenges for swimmers of all abilities.

Reflecting on their success, Priory teacher Angie Shaw described the day as, “terrific, which enabled a new group of children coming through to represent the school” and teacher lead Tom Parkington said, “It was great to have competed against other Suffolk Schools again, and we are humbled to have won.”

Claire Hale, PE coordinator at second placed Stone Lodge Academy, said: “It’s been fantastic. It’s always a really good event and it gives some of our children the opportunity to do something they don’t usually get to do, which is the main thing.
“The kids have had a lovely time. They were dead nervous when we got here, but since they’ve got in the water and done their bit, they love it.
“A lot of our children don’t normally get the opportunity to do things like this. We can do things at school for them, but it’s easy for them to get cocooned into what they are doing, but at events like this they can socialise with other teams.”

Teresa Hills, swimming instructor at Thomas Wolsey School, who finished third in the Panathlon Swim Challenge, said “The kids are really having a good time. They look forward to coming and they’ve done reasonably well, so they are really happy.
“It’s fun and the children learn through fun. They can play here and they see everybody together, rather than just where we are at school. They’re all pleased to be here, they like the atmosphere and, win or lose, they’ll be happy because they’ll go away with a medal of some description. They’ll be really pleased.”

The Discovery Swim Challenge was won by Northgate who were “delighted” with the result, according to PE teachers. Both Miss Gemma Irwin and Andy Forbes commented, “We are overjoyed to have had such success at this gala. The whole event has had such a marvellous atmosphere.”

Connor Tye, Northgate Team Captain, receiving the Discovery Trophy from Ben Wallis (pictured right). “As Captain of the winning team, I can say we 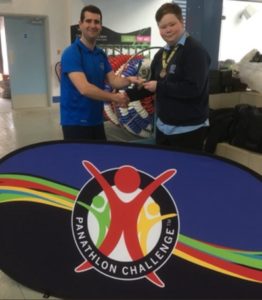 The leaders were provided by Copleston High School, Dauya Calver said “ I saw many children with a range of disabilities and I enjoyed making the event happen for them.” Fellow leader Martha Brewer said, “ It was extremely competitive and you could see the children get better each time they got in the water, it was really fun to be involved.”

We would like to thank Ben Wallis, Discovery Project Coordinator and Inclusive Lead of the Ipswich and South Suffolk Schools Games. The Emma Holloway Foundation and Crown Pools.