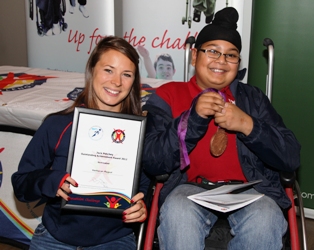 Triple Paralympic medallist Liz Johnson has become an ambassador for the Panathlon Challenge.

Liz a veteran of 7 Panathlon visits previously will attend Panathlon events around the country inspiring a new generation of athletes. Liz, 27, won Bronze in the 200m Breaststroke S6 class at London 2012 to add to the Silver in Athens and Gold in Beijing. Liz also took the Paralympic Oath in front of 80,000 spectators and a TV audience of tens of millions at the Opening Ceremony of the Paralympic Games.

Over  3,000 school children will participate in Panathlon events this year, including pupils from over 200 schools. Sports include boccia, polybat, table cricket, new-age kurling, athletics field and track, and football (severe learning difficulties or ‘SLD’, visually impaired and powerchair). New for 2013 is a swimming programme across 18 London boroughs and pilots in other counties in conjunction with Amateur Swimming Association (ASA) aquatics.

Liz, 27, said: “It’s great to become a Panathlon ambassador. I’ve always been a big fan of what Panathlon achieves with young disabled children in sport, many of whom get no other competitive sporting experience, other than in Panathlon. “It is also great that swimming, my sport, is being introduced within Panathlon. There are lots of exciting times ahead and I look forward to being involved in Panathlon in the coming months and years.”

Panathlon founder Ashley Iceton said: “We are very grateful to Liz for supporting our work across the UK. While Panathlon is very much a non-elite grassroots competition, the presence of a Paralympic champion in our midst acts as a real inspiration for the young people.”
As an official ambassador for the charity Liz will also attend the Panathlon Fundraising Ball on May 11 at Hilton London Stansted Airport, where she will speak about her inspirational story of triumph over adversity. more details here