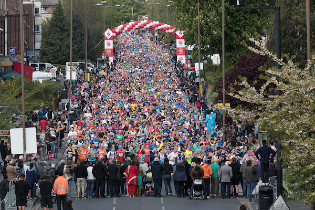 April the 22nd may seem some time away, but the date looms large for five people who will run 26.2 miles on that day in the Virgin London Marathon, to support the Panathlon charity.

The world famous Marathon will see the largest ever Team Panathlon take part with five runners with varying experience, from complete novice and first timer, through to an ultra marathoner who is used to these kind of crazy challenges.

All will be conquering their own personal quests in April, but will be united in their attempts to raise funds for Panathlon along the way.

Louise Deveney completed her 4th Marathon in 2014 and vowed it would be her last. However, after a 4 year break from running to concentrate on her family, she has been tempted out of retirement. Louise is part of the St. James’s Place group who are one of our key sponsors and she has set herself a target time of under 4 hours 45 minutes. Louise has been training 6 days a week to give herself the best possible chance of achieving this. Please see Louise’s fundraising page to support her further.

Lisa Harkry is attempting her first ever Marathon this year and is proud to be raising funds for Panathlon. Having previously worked within charities and non-profit organisations, she understands how much people rely on public support and services. Lisa will be pounding the pavements from now until April in the hope that Panathlon can give more sporting opportunities to disabled young people all over the country. Lisa’s fundraising page is here

Jeannie Boyle has been part of Team Panathlon for several years running the Royal Parks Half Marathon several times. Jeannie has also volunteered at several Panathlon competitions through her employer, and another Panathlon sponsor, EQ Investors. Jeannie said, “Having seen first hand the joy on the faces of the children competing in Panathlon, I know what impact the charity has.” Jeannie’s fundraising page is here and her employers, EQ Investors are kindly matching any donations!

Katie Legg first supported the Panathlon charity in 2012, whilst working at Gold Challenge and enabled 20 Panathlon competitors race on the Olympic track in front of 20,000 people, months before the opening of the London Olympic Games in an official ‘test’ event. Katie has stayed in touch with the Panathlon charity since then and deferred her entry from last year due to injury. Better look this time Katie!

Simon has much experience of ultra marathons and Ironman challenges, so we are expecting him to cruise across the line even though he’s only recently returned from injury! See Katie & Simon’s fundraising page here.

Thanks to all our incredible runners, we salute you for your hard work in training over the winter months, and every penny you raise will go to a great cause – see some of the young people we have helped recently here.

We will keep everyone updated with progress! Thank you for your support.