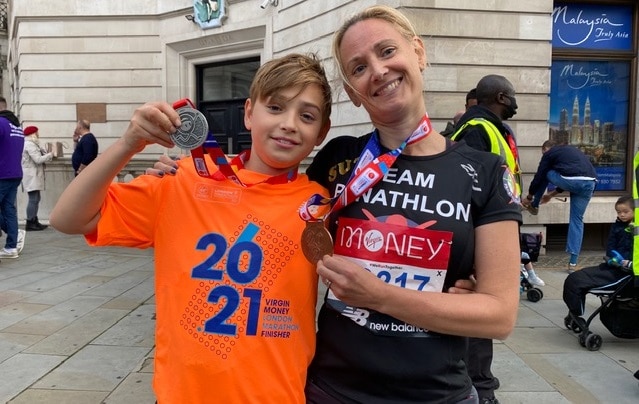 Four weary but proud heroes made lifelong memories last Sunday after running the London Marathon to raise money for Panathlon.

Jack Warn, Matthew Lewis and Suzy Haven all completed the historic 26.2 mile course while Suzy’s son Monty ran the mini marathon – and all did it to support Panathlon in giving thousands of young people with disabilities and special needs the opportunity to take part in competitive sport.

For Suzy, finishing the marathon represented the realisation of a dream she’d held since running the mini marathon in 1990, 91 and 92. To fulfil her ambition and see her son follow in her footsteps on the same day made it a very special experience.

“It was amazing,” said Suzy, who crossed the line in 4:20:15. “The supporters en route were fantastic and there were so many of them!

“I thought it was going to be quiet because as runners we were told only one supporter each was allowed. Clearly no one listened. At Cutty Sark, London Bridge and Canary Wharf the noise was deafening, which just made you run faster.

“I can’t describe my elation when I saw Big Ben when running along the Embankment, wishing it would all be over. I’ve already decided to put my name in the ballot again!”

Suzy said seeing her son Monty in the crowd proudly showing off his mini marathon medal, having run earlier in the day, was a big boost on her way round. “He wants to do it again next year too,” she said.

Suzy and Monty have so far raised over £4,000 (smashing their £2,500 fundraising target) but don’t let that put you off donating more via her VirginMoney Giving Page.

Suzy’s achievement continues a Haven family tradition of endurance feats to raise money for Panathlon – her husband Andy ran six marathons in five days through the Atacama Desert in Chile two years ago.

We also extend heartfelt admiration and thanks to Matthew Lewis (right) from our sponsors EQ Investors who not only ran Sunday’s marathon (3:49:57) but is running the Royals Parks Half next Sunday (October 10), alongside his wife Dani and colleagues, to raise money for us too! You can sponsor them via their JustGiving page.

“It was great although I am hurting today!” Matthew said on ‘the morning after’. “I think today is going to be a bit of a struggle. I’m going to rest up now until next Sunday.”

Jack Warn (below) from Panathlon sponsors BlueBay Asset Management also raised money for us by doing 26.2 miles – but he did the ‘Virtual’ London Marathon, running between his home in Reading and his parents’ in Farnham.

After clocking in at 3:40, he said: “The whole experience was awesome but definitely a tougher challenge when compared to running the actual London Marathon. It made me realise how much difference the crowd makes!

“I’m very happy with my time, especially as I took a little lull period to allow for my son to jog a little stretch with me!

“My wife and son really helped me by popping up at certain points along my route. This help, combined with the knowledge that my efforts were helping to garner some support towards a fantastic cause, really did help to keep me going.

“I’m so proud to have been able to raise some money for your incredible charity and look forward to helping out in whichever way I can going forward!”

(You can still sponsor Jack via his VirginMoney Giving page)

Panathlon CEO Ashley Iceton said: “We cannot thank our runners enough for their herculean efforts and look forward to seeing even more of you at the start line for next Sunday’s Royal Parks Half!”