More than 200 disabled children from 27 schools across eight London boroughs will be bidding to strike gold at one of the capital’s famous 2012 Olympic and Paralympic venues on June 15.

The Copper Box Arena in the Queen Elizabeth Olympic Park will, for the fourth time, stage the London Panathlon Multi-sport Finals.

Liz said: “Very few people get the chance to compete at such an iconic venue as the Copper Box Arena. Without Panathlon, many of these children wouldn’t get the chance to play any sport at all, so to get the opportunity to compete here in the Olympic Park is very special.”

Joining them at the Copper Box Arena will be teams from Islington, Lewisham, Wandsworth and Harrow, who will battle it out in the London Plate Final.

The Finals are the culmination of another packed season of Panathlon competition, which has seen more than 1,500 disabled youngsters from 102 schools representing all 32 London boroughs compete in a series of multi-sport competitions to determine who would reach the Copper Box finale.

The Mayor of London, Sadiq Khan, said: “As Mayor, I want everyone in London to have the chance to take part in sport. So I’m delighted that more than 1,500 young Londoners have joined in this year’s Panathlon Challenge. I’m proud that 27 London schools have qualified for the finals here at Queen Elizabeth Olympic Park. It is a fitting end to an inspirational programme. I hope you enjoy the Panathlon Challenge Finals.”

Altogether there were 16 qualifying competitions, the last of which – in March – saw Barking & Dagenham win the East London Final in impressive style to progress to the climax of the main competition and Islington reach the Plate final.

The East London championship was one of eight qualification competitions in March, adding to the first-round events which took place in January and February.

Enfield and Harrow won through from the North Final, Merton and Wandsworth qualified from the West Final, and Croydon and Lewisham came through in the South Final. 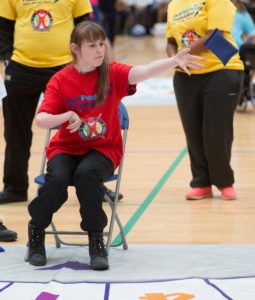 Georgina Hart (left) a previous winner of our Jack Petchey Outstanding Achievement Award and part of the defending champions from the Barking & Dagenham team said, “I can’t wait to be back at the Panathlon finals at the Olympic Park – it is one of my highlights of the year.”

The charity’s work is funded in London by the Jack Petchey Foundation, the Mayor of London and the St. James’s Place Foundation.

Mike Wilson CBE, Chairman of the St. James’s Place Foundation, said: “We are extremely proud to support Panathlon and extend our partnership through to 2020, to ensure Panathlon becomes a truly national charity and every child in every part of the country has the opportunity to enjoy the benefits of the Panathlon Challenge.”

Sir Jack Petchey CBE said: “I’ve always thought young people should take part in sport. Some of my best childhood memories are of being out cycling, playing table tennis or enjoying another sport. That’s why I am delighted the Jack Petchey Foundation has supported Panathlon all these years. Seeing young disabled people getting involved proves what I always tell everyone- if you think you can, you can. Their enthusiasm shows they will cherish these memories too.”