The 16 teams taking part in the London Champions Semi-Finals next month have been decided, following eight first-round competitions over the past month involving all 32 London boroughs.

Interestingly, three of these teams (Newham, Wandsworth and Brent) have now qualified for the Champions half of the draw, having stepped up from competing in the Plate Final last year at the Copper Box Arena.

The winner of each of the four Champions Semi-Finals and each of the four Plate Finals then go through to the London Finals on Thursday June 16th at the Copper Box Arena. See highlights of last year’s finals here.

In all, 687 children from 81 schools took part in the eight first-round events and were supported by 157 Young Leaders. A full set of results of those first-round competitions can be seen here. 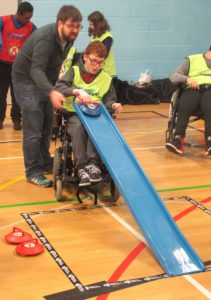 If you add in the football and swimming competitions which have already taken place in London this year, then over 1,250 young Londoners have competed in Panathlon already this academic year.

This is further enhanced by impairment specific competitions, such as deaf multi-sports and deaf boccia, and many hundreds competing in Primary Panathlon too. It is shaping up to be another record-breaking year of activity!

For further details and photos, each competition features in one of the blog entries.

The line-up of the four London Semi-Finals taking place in March is:

Check out the remaining fixtures and training dates.