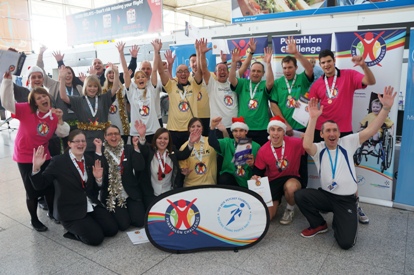 Staff from Stansted Airport have helped raise over £12,000 for Panathlon after a year-long fundraising drive.

The Panathlon Challenge was the focus of Stansted’s fundraising efforts for 2012 after being chosen by staff as the airport’s inaugural charity partner of the year.

Various fundraising activities were held throughout the year, including a special mini Paralympic Games in the terminal. Airport staff have also volunteered and supported the charity at a series of local sporting events.

Panathlon Founder, Ashley Iceton, said: “We’d like to thank everyone at Stansted Airport for their kind donations and the support they’ve given the charity throughout 2012. The money will go towards providing specialist adapted sports equipment for several local schools. Thank you once again.”

At a special sporting festival in the terminal to celebrate a year of fundraising this week, Tim Hawkins, Stansted’s Regulatory and Planning Director, presented the organisation with a cheque for £1,340 raised from the airport’s annual Christmas card donation scheme and £2,000 collected from staff attending the airport’s stakeholder dinner.