More than 200 disabled schoolchildren from 25 schools will be battling for gold in the iconic Copper Box Arena at the Panathlon Challenge London Final on June 16th.

Schools from four boroughs will jostle for the title of 2016 London Panathlon champions at the venue for the 2012 London Olympic and Paralympic Games – defending champions Croydon, last year’s runners-up Barking & Dagenham, plus first-timers Hillingdon and Enfield.

A further four teams – Sutton, Havering, Lambeth and Harrow – will be competing to win the Panathlon London Plate Final.

Watching will be Panathlon ambassador and triple Paralympic medallist Liz Johnson. Ahead of the event, she said: “Very few people get the chance to compete at such an iconic venue as the Copper Box Arena. Without Panathlon, many of these children wouldn’t get the chance to play any sport at all, so to get the opportunity to compete here in the Olympic Park is very special.”

Fellow Paralympian and Panathlon patron Steve Brown will also be present to inspire the competitors. He was captain of the GB wheelchair rugby team at London 2012 and is a regular visitor to Panathlon events.

The two finals are the culmination of another packed season of Panathlon competition, which has seen more than 1,500 disabled youngsters from over 100 schools representing all 32 London boroughs compete in 16 qualifying competitions to determine who would reach the Copper Box finale. 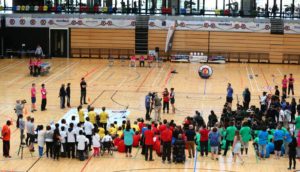 This is the third year that Panathlon has held its showpiece event at the Copper Box Arena. In July the Aquatic Centre will host Panathlon’s second regional swim final.

The charity’s work is funded in London by the Jack Petchey Foundation, the Mayor of London and the St. James’s Place Foundation. Additional support for the two finals at the Olympic Park comes from John Lewis Foundation.

The Mayor of London, Sadiq Khan, said: “I want to ensure all Londoners can participate and compete in sport at all levels. The Panathlon Challenge offers thousands of young Londoners the opportunity to take part in competitive sport each year, where they might not have otherwise found an outlet for their talents. I am proud to support these inspirational competitors and I look forward to this event going from strength to strength in the future.”

Lorraine Veck, who coaches part of the Hillingdon team, said: “I’ve been coming to Panathlon for over 10 years and this is the first time we have got through to the final. It’s brilliant. We are a mainstream school and this gives disabled children something which they can achieve for themselves. They all want to do Panathlon. At school they feel they are different because of their disability. They come to Panathlon and they realise they are not that different. It builds their self-esteem and lifts their self-confidence. They become less inhibited about their boundaries.”

Sir Jack Petchey CBE said: “We are delighted to have been able to give long-standing support to Panathlon and are exceptionally proud of what they have achieved. It is a pleasure to see young disabled people getting involved with such enthusiasm and commitment. The events provide much enjoyment for all involved.”

Mike Wilson CBE, Chairman of the St. James’s Place Foundation, said: “We are extremely proud to support Panathlon and their vital work to improve the lives of so many young people and their families through participation in sport across the country.”