More than 200 disabled schoolchildren from eight London boroughs will get the rare opportunity to compete in an Olympic and Paralympic venue on Thursday (18th June) at the London Panathlon finals.

With Team GB Paralympians Liz Johnson and Steve Brown and TV star Alex Brooker watching on, teams from Croydon, Hammersmith & Fulham, Sutton and Barking & Dagenham will compete at the Copper Box Arena in the Queen Elizabeth Olympic Park for the right to be crowned 2015 Panathlon champions.

Joining them at the iconic London 2012 venue will be teams from Kensington & Chelsea, Brent, Wandsworth and Newham, who will battle it out in the London plate final.

Triple Paralympic medalist and Panathlon ambassador Liz Johnson (right) said: “Very few people get the chance to compete at such an iconic venue as the Copper Box Arena. Without Panathlon, many of these children wouldn’t get the chance to play any sport at all, so to get the opportunity to compete here in the Olympic Park is very special.” 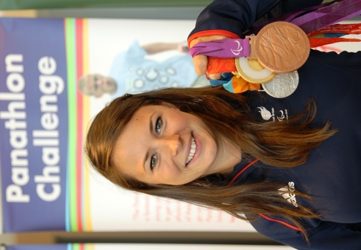 The finals are the culmination of another packed season of Panathlon competition, which has seen more than 1,500 disabled youngsters from over 100 schools representing all 32 London boroughs compete in a series of multi-sport competitions to determine who would reach the Copper Box finale.

The Mayor of London, Boris Johnson, said: “I am thrilled that so many Panathletes will be competing at the Copper Box and the Aquatic Centre this year.

“The Panathlon Challenge gives thousands of children the opportunity to put their sporting talents to the test. Watching Panathlon go from strength to strength is a wonderful legacy of the 2012 Games and a great pleasure to support.”

TV presenter and Panathlon patron Alex Brooker (below) said: “Panathlon is a fantastic charity so it’s great that they are heading back to the Olympic Park for the London final. We’re just a year out from the Rio 2016 Paralympics but the memories created at London 2012 are still fresh and will last a lifetime. I’m sure competing in the Copper Box will do the same for all the children taking part in the Panathlon final and who knows, there might even be a future Paralympian in action.”

This is the second year that Panathlon has held its showpiece event at the Copper Box, the state-of-the-art London 2012 venue. In July, the Olympic Park’s Aquatic Centre will host Panathlon’s first regional swim final. 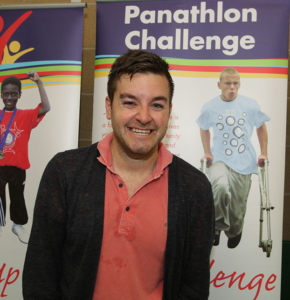 Panathlon provides sporting opportunities for over 6,000 disabled young people each year, across London and 26 counties nationwide.

Over 400 schools will have taken part in 110 of Panathlon’s ‘mini Paralympic’ competitions by the end of 2014/15, with over 50,000 active hours of sport provided to disabled children.

The charity’s work is funded in London by the Jack Petchey Foundation, the Mayor of London and the St. James’s Place Foundation.

Jack Petchey CBE, said: “We are delighted to have been able to give long-standing support to Panathlon and are exceptionally proud of what they have achieved, it is a pleasure to see young disabled people getting involved with such enthusiasm and commitment – the events provide much enjoyment for all involved.”

Mike Wilson, Chairman of the St. James’s Place Foundation, said: “We are extremely proud to support Panathlon and their vital work to improve the lives of so many young people and their families through participation in sport across the UK.”

The Mayor’s Commissioner for Sport, Kate Hoey, said: “I am delighted to be supporting the Panathlon final with the Mayor again this year, but this is about so much more than a day of competition. Over the course of the year there have been 16 qualifying competitions involving 1,500 children from every borough in London – an incredible effort from the Panathlon Foundation.”

Any media interested in attending the London Panathlon final, or if you would like further information and or photographs from the event, please email Dan Pope at ConnectSport or Ashley Iceton at Panathlon.