McKenzie O’Reilly has just made the transition to secondary school and can look back with an immense sense of achievement at the benefits he has gained from Panathlon during his primary years.

The Abbeymead School pupil, who has spina bifida and mild hydrocephalus, has been taking part in Panathlon events for four years now and starred in the first ever Panathlon Gloucestershire Primary Swimming Final in May 2017.

Swimming became a central part of McKenzie’s development and has provided ideal form of physiotherapy for McKenzie, who had two major spinal operations at the ages of three and five.

After the last spinal surgery he was left with weakness and pain in his lower legs, which means he now needs to use a wheelchair. The only activity he was allowed to partake in was swimming.

Without Panathlon, McKenzie wouldn’t have had the opportunity to represent his school in any sporting event. Inspired by Panathlon’s competitions, he now has one-to-one lessons with a swimming instructor at his local pool and trains weekly.

His mother, Kerry, said: “Panathlon has made him enjoy sport and accept that he and others can achieve through sport. He wants to be in the pool encouraging younger swimmers who may not have ever participated in an event to challenge themselves and be proud.” 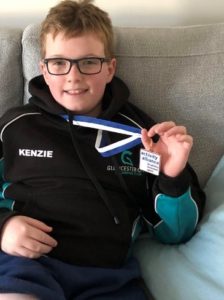 McKenzie was given Panathlon’s Outstanding Achievement award for Gloucestershire in 2017. This year he won a bronze medal in the National Junior Para Swimming Championships in Sunderland in the 400m freestyle for 10-13 year olds, even though he was only aged 10.

McKenzie has participated in several primary multi-skills Panathlon competitions – and every time he comes back home buzzing.

His mother Kerry said: “McKenzie is not a typical child who would get picked to represent his school in competitions. Panathlon is great as it gives children that opportunity to be picked for their school.

“It doesn’t matter what activities they participate in or even how well they do. They get to feel part of a team and be proud of their achievements, they always come home with a medal no matter how well they do.”

Throughout primary school, his family has observed McKenzie’s confidence grow as well as his interest in sport. He now has a busy diary of swimming, wheelchair rugby, wheelchair tennis and also riding for the disabled, participating in local and national competitions in these sports.

Kerry added: “As parents we are proud of every moment but what makes us most proud is now seeing McKenzie cheer on his friends to do well.

“Thank you to Panathlon for allowing McKenzie and so many other children the opportunity to represent their schools, to challenge themselves, be proud of themselves, have choice and most of all have fun.”

Panathlon wishes to thank the St. James’s Place Charitable Foundation for their continued support with running and expanding our primary-age activity.