Panathlon Challenge has ran successfully in Merseyside for 12 years now, mainly due to the support received from Merseyside Sports Partnership and the Greenbank Academy. This has meant well over 1,000 participants have benefitted during this period, all been given sporting opportunities in a range of sports.

Each year two Multi-Sport competitions are held, one for Primary aged students and one for Secondary aged competitors, both at the Greenbank Academy, a specialist centre of excellence, owned and run by disabled people. Each of the 6 Boroughs on Merseyside enters a team, from a mix of special and mainstream schools.

This years Primary Panathlon Challenge took place on Wednesday 12th March with 42 Primary Aged Competitors involved, 14 of which were from mainstream schools. The Team from Wirral took the lead in the standing long jump while Liverpool excelled at the Bean Bag throw but Halton were the out and out winners, with particular skills in Poly Bat and track laps. Halton won with 38 points, Wirral came second with 32 points and Liverpool took third place with 20 points and Knowsley in 4th with 10 points. Halton provided a very strong team on the day recruited from 5 schools, some of whom have not entered children into sports events in the past, and managed to win 4 out of the 5 sports on the day. 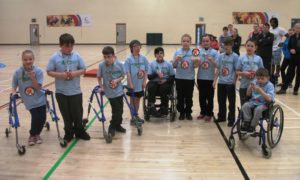 The Panathlon Challenge Secondary event, part of the Sainsbury’s School Games in Merseyside, took place on Wednesday 19th March.  Five boroughs and 70 children (17 of which from mainstream) altogether competing, it was once again Halton’s day after also they won the Primary event last week.

Three of the Boccia players will be signposted to clubs and hopefully some will be selected for the impairment specific National squads in the future. 1 CP football player from a mainstream school in St Helens was identified as a potential athlete for the future and will be signposted to join one of our mainstream football clubs to further his sporting opportunities. This event showcases the level of ability for participants and allows the Partnership to talent ID potential stars of the future especially those children from mainstream schools who will be competing for the first time. 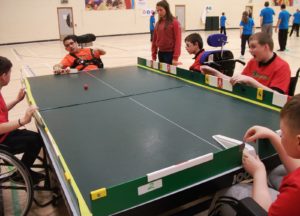 Panathlon’s Ambassador Liz Johnson was there to muck in, inspire the youngsters and award medals said:  “The thing I love most about the Panathlon Challenge is the competition. Taking part in sport is great and many of the sports here are inclusive, but you cannot beat the feeling of competition. I think it’s amazing that Merseyside Sports Partnership run this event in partnership with Panathlon. I especially like the fact that some sports require children from different impairment groups to take part, as it encourages them to work together as a team.  So many lessons can be learned through sport and everyone deserves that opportunity!”

Event Organiser Steve Sullivan commented: “It’s been a great day of sport today and thanks to the support of volunteers from Greenbank College, Liverpool John Moores University and some individual volunteers who work with Merseyside Sports Partnership, it ran very efficiently too. I’m particularly proud of the fair play on display throughout the tournament and particularly from the St Helens team.”