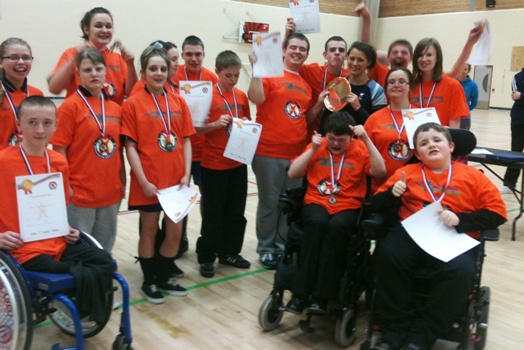 59 children in total attended from 5 of the local authorities 20 of whom came from mainstream schools, to compete in very highly competitive event with Knowsley winning Table Tennis and Football and coming second in Boccia and Athletics, to win the competition overall from Sefton in 2nd, Wirral in 3rd, Halton in 4th and Liverpool in 5th.

Three children who did attend will progress through to compete for the North West in Athletics and Boccia and hopefully some more will be selected for the impairment specific National football squads.

This event showcases the level of ability for participants and allows the Merseyside Sport Partnership to talent ID potential stars of the future especially those children from mainstream schools who will be competing for the first time.

Thanks to Merseyside Sport for all their organisation and co-ordination and Greenbank Academy for hosting.

Liz Johnson, (pictured below) Panathlon Ambassador said, ” It is really good to see the complete range of abilities competing here today, and its great to see Panathlon working in another area.”