Worcestershire – On Monday 13th February 51 pupils from 4 schools across the county took part in a Panathlon Challenge at Rylands Centre, Bromsgrove for the Worcestershire finals day, with 20 Young Leaders officiating.

Carina Taylor, the Project Ability lead said, “It was a very successful event again and this competition keeps evolving each year. We had new schools here today and we have seen an increase in the standard. Each year this competition just grows and grows. Panathlon is now certainly part of the county’s landscape.”

Birmingham – On 14 February, the Sutton Campus of Birmingham Metropolitan College hosted the Birmingham qualifier for the right to be involved in March’s Multisport Finals day. The event was led by a group of 14 pupils from the College who also use the evidence of work as part of their degree course.

With 43 children attending the event, competition was fierce with the dominant team being Wilson Stuart, who through the virtue of winning all but one of the sports on the day amassed 58 points out of a maximum of 60 available.

Runners up position were close with only 6 points the difference between 2nd and 4th. 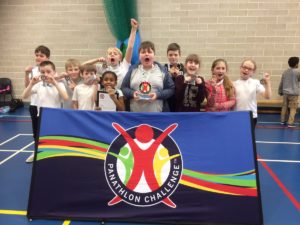 The runners-up and also securing a finals berth were the Birmingham Primary champions, New Oscott School pictured here on the right.

Neil Dawson, the lead teacher from Wilson Stuart School said, “Another brilliantly organised event. Panathlon is great for all abilities, which is why we come back to compete every year in these competitions. We look forward to finals day”.

Scott Jeffries from year 6 at New Oscott School said, “It was great coming second; I now have a full set of colored medals from competing in Panathlon.”  Lindsay McMahon said, “Some of the team said, we think Scott jinxed us about the silver, however we are happy to be involved again in a months time and all the children can’t wait to do it all over again.”

Thanks to St. James’s Place Foundation for their support of these events