Moor House School & College were the victors in the Panathlon National U18 Swimming Final at the London Aquatics Centre – eclipsing rivals Priory School in a thriller by a single point.

The gold medal winners, from Oxted in Surrey, (pictured left) scored 67 points to finish first out of 11 schools who had travelled from as far away as Merseyside and North Yorkshire to compete in our first ever national U18 final at the prestigious London 2012 venue.

Forest School’s long trip from Knaresborough near Harrogate turned out to be hugely worthwhile as they finished with bronze medals, with Buckinghamshire’s Egerton Rothsay fourth and Ashley School, from Lowestoft, in fifth.

Whitefields School, who are reigning London Swimming champions as well as last year’s South of England Swimming Final winners, finished down in a surprising eighth place, with other activities going on at school meaning they had a slightly weakened team. 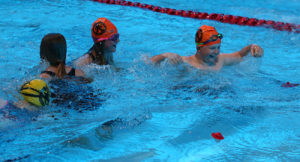 With a gold medal proudly hanging around his neck, 13-year-old Moor House pupil Freddie Southern said: “That was amazing! Out of 11 other schools, in fact out of the whole country, we are the champions! I am pretty impressed with myself. I can’t put it into words!”

Moor House Head of PE, ICT & Computing, Matthew Crowhurst, added: “We have been talking about this event for months. We held the regional qualifier at our school so that has just built up the excitement.

“These days it’s all about inclusion and a lot of mainstream schools are focused on competition, which leads to some less-able children actually being excluded. This [Panathlon] allows us to compete and it’s fantastic for the students and the school that they have reached this national level.” 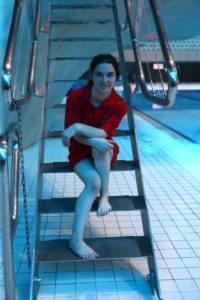 For 18-year-old Sammy Farrant (left) it was a bittersweet moment to receive her silver medal. She is just two weeks away from leaving Priory School in Suffolk and this was the last of what she estimates to be 15 Panathlon competitions she has competed in.

“I have so enjoyed making friends in other schools and academies,” she said. “Panathlon has been really good for our school and has helped us so much. I love the water and the venue is just amazing.

“I have my Panathlon medals in a safe box at home. I am going to keep them and show my grandchildren!”

Sammy is now off to Suffolk College and will be working towards her ultimate ambition of working in the Titanic Museum in Belfast.

Sammy’s boyfriend Nathan was also part of the team. He commented: “Sammy is funny, hilarious, fun to be with and always makes me happy to be with her.”

Reece Pidd, 12, of bronze medallists The Forest School, reflected: “I’m going to show my medal to my family and tell them how amazing the trip was – and how amazing I am too! It took us a long time to get here, but it’s really been worth it!”

Teaching assistant Sam Thompson added: “We had no air conditioning in our minibus and we stayed in a hostel last night and for some reason the heating was on full-blast – but it’s all been worth it! 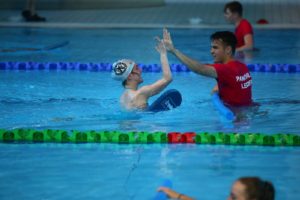 “It means so much to them. They’ve worked really, really hard. It’s a great opportunity for them to show what they can do and they won’t get opportunities like this back at home. They are all in awe of this venue – even if one of our kids commented that the roof looks like a pringle!

“It really  boosts their self-esteem and once they build up their confidence here it gives them that boost to join their local pool or club. Just because they’ve got disabilities it doesn’t mean they can’t spread their wings and do other things. This will give the confidence to do so.”

“I’m going to go home and wave this medal in my brother’s face, because he’s never won a medal!” he chuckled. “I really like the water – it makes me feel happy. It’s amazing to be here because if you think about it, Tom Daley has been in this very same pool, so it’s extra special.”

John Rice, PE co-ordinator at Merefield School from Southport in Merseyside said competing in the event gave his pupils with severe learning difficulties “a sense of belonging”.

“It’s such an amazing opportunity,” he said. “It gives them an immense sense of achievement. They get huge attention and praise from their peers back at school for it and it inspires the younger ones to join in when they’re a bit older.

“When they compete at school in sport it’s more fun-based and against their own peers but when they go out of school to places like this they learn about what it means to be competitive. The kids really respond to that. It’s been a long trip but it’s been so worth it.”

Jack Woolston, 14, from fifth-placed Ashley School in Lowestoft said the competitive element was “really, really important “ for him, adding: “I’ve never been here before and at first I was quite daunted and felt nervous but when you’re in the water you just feel free.”

The Young Leaders for the competition were all pupils from Richard Hale School in Hertford, ably assisted by two PE apprentices from Lonsdale School in Stevenage. One of them, 18-year-old Faye Lahiffe, said: “This is really rewarding. You can tell that the kids really love it. We work at a school for severely disabled children so to see how the different children learn and react is fascinating.”

For a full collection of images- please see gallery.