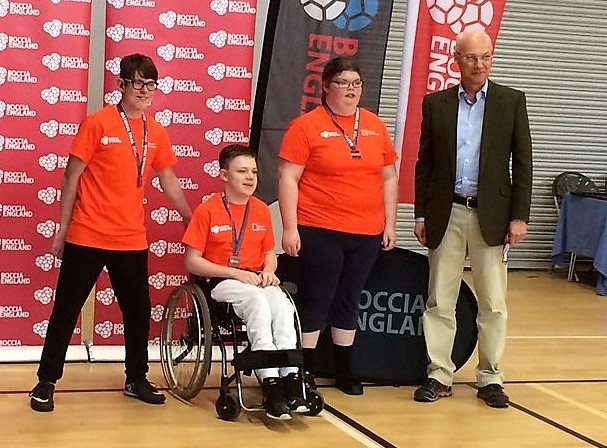 Teams of students from Beacon Hill Academy School in Thurrock headed to Sheffield this month for the finals of the Lord’s Taverners Under-19s National Boccia Championships.

Beacon Hill Academy represented The East Anglia South region having won this regional title in the Physical disability section, it was out second consecutive year qualifying for this tournament (pictured left.)

The school this year had two teams attending after having managed to qualify a team in the PAN Disability Finals as well as the Physical Disability division.

The Physical Disability team of Reece Bowers, Callum Branch and Courtney Burgess came through pool play to make the Semi-finals where they met favourite and last year’s Champions, Angmering of Sussex.

After a close fought match, Angmering secured victory, which saw Beacon Hill compete in the bronze medal match against Woodlands School of Plymouth.

Beacon Hill started strongly and at no point were threatened as they secured a 7-1 victory, bronze medals and the right to be called the third best team in the country

Brandon Mullin (Coach) said,” I am ecstatic with the way our PD team played today and finishing as the 3rd best Boccia team in the country is one of our schools greatest sporting achievements.  We placed 10th in 2016 and put new strategies and training adjustments in place this year.  It is great to see how happy the students are with their incredible improvement.”

Callum Branch a member of the team said, “Taking part in the boccia final was great; it was so much more intense than the other competitions. On the day I was quite nervous and had put in extra practice to improve my throwing. The best part of the day was coming third I couldn’t believe we actually won a medal. Since playing boccia I have felt included and I’m really enjoying playing it!!”

For the Pan team it was the first time Beacon Hill qualified a team in the PAN division and also the first time for the three students in the team had attended a sports tournament at the National level.

Brandon Morris, Aadi Ghimire and Aaron Rundell secured 2 wins during the day as the Pan team and managed to finish 7th overall, a fine achievement for their first national outing

Brandon Morris of the PAN team said,“It was my first time competing at this level in Boccia stadium and it was a real test.  The level of play was very high and despite a slow start I am proud of our 7th place finish in the PAN division.”

Well done Beacon Hill on this national success and we look forward to them competing next year and again being extremely competitive.