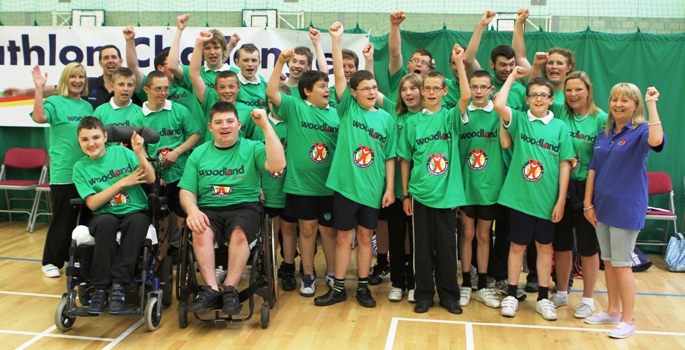 Tendring, comprising pupils from Marketfield and Shorefield Schools, defeated 2011 champions Thurrock (Beacon Hill School) by the narrowest of margins at Braintree Sports Village, claiming victory in the last race of the day.

The final was part of Essex County Council’s School Games and involved 100 disabled young people, who had all qualified through earlier rounds.

Tendring won the boccia and athletics events to collect 50 points, two ahead of Thurrock who won new-age kurling and polybat. In third place were West Essex (Oakview School, Loughton) with 38 points and North-West Essex (Southview School, Witham) were fourth with 32 points.

“Panathlon was a fantastic experience for all our students,” said Joanne Caley, a teacher from Marketfield school in Clacton who was helping coach the Tendring team. “It is such a valuable and worthwhile competition.”

Panathlon in Essex this year was funded by the Jack Petchey Foundation, who helped to fund the Young Leaders programme. This enabled 12 students from Great Baddow School to be trained by Panathlon earlier in the year and they officiated in the final as sports officials.

Panathlon founder Ashley Iceton said: “It has been a fantastic climax to the Essex Panathlon year which started last November.

“All the hundreds of disabled young people in Essex should be proud of their performances. As a charity, we need to thank our supporters for enabling us to carry out this much-needed work.”

Additional support came also from BAA Stansted Airport and Hilton London Stansted who provided funding and staff to officiate at the competitions, with further corporate sponsorship from the Woodland Group. The local branch of Asda in Witham provided refreshments for all the competitors.