Panathlon’s impact was hailed as ‘beyond just sport’ by Quilters Junior School after their pupils finished as champions in Panathlon’s Essex Primary Swimming Final at the London 2012 Aquatics Centre.

Rachael Fitzgerald, SENCO at Quilters, said the “superb” organisation of the event meant several of her students were able to overcome anxiety about competing, as well as learn several key life skills from their trip to the Olympic Park.

“Panathlon’s events are so child-centred, with a relaxed, fun atmosphere that also enables them to achieve and fulfil their potential,” she said.

“But these events don’t just have a sporting impact. Earlier today, some of our students were saying, ‘I don’t want to go,’ and were highly anxious, but they’ve all had a go and done really well. They have sat, watched and taken turns. That’s a massive thing.

“We came up on the train from Billericay so these are all life skills they’re learning. This is a privilege for them and they know they have to behave.” 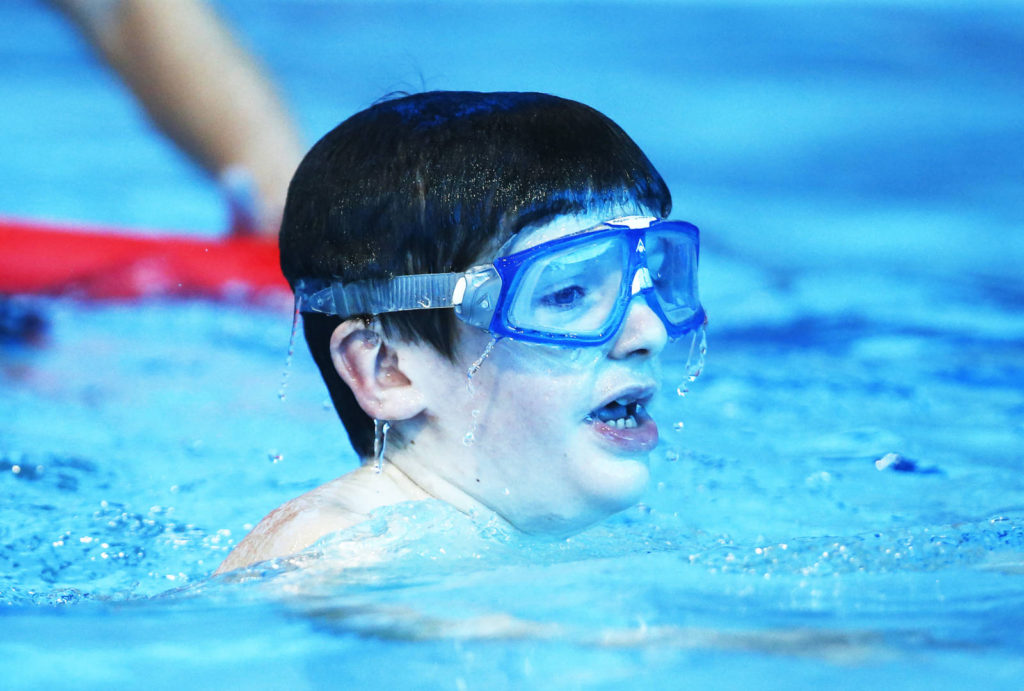 For silver medallists Temple Sutton, it was their first time at a Panathlon swimming event, and swimming teacher Ruth Thompson said it meant “an awful lot” to her competitors.

“These aren’t the children who would normally represent the school so it’s a great opportunity for them,” she said. “Even the drive down here on the coach is something they never, ever do. They’ve found it really exciting. They’ve been asking me for ages, ‘Is it this week? Is it this week?’

“One of the boys was really apprehensive about it and I’ve been telling him for weeks that he’ll perform well. Now he’s here, he’s got his head up, his chest out and it’s really boosted his confidence.” The boy in question, 10-year-old Caleb, said: “I was a little bit nervous, but now I feel really happy and excited. I’m really proud of myself. I’m really happy for all of us that we’re representing our school.”

There was similar jubilation amongst students at third-placed John Ray School, with sports coach Jamie McLoughlan revealing that children has been building up to the final for weeks.

“It’s amazing in the school corridor when they stop you and say, ‘I can’t wait to go swimming next week!’ That sums up why we do it. It’s such an amazing experience,” said Jamie. “The opportunity to come to such an iconic venue is amazing. They’re seeing stuff they have never seen before. It really changes them and gives them opportunities they don’t usually have and their confidence improves so noticeably.

“These aren’t like the boys who play football all the time who are full of confidence all the time. But here it’s an equal playing field so that builds their self-esteem and they’re up against other pupils with the same sort of ability which allows them to see how good they are. They take that confidence back to school. It shows them they can always better themselves which has a knock-on impact academically. 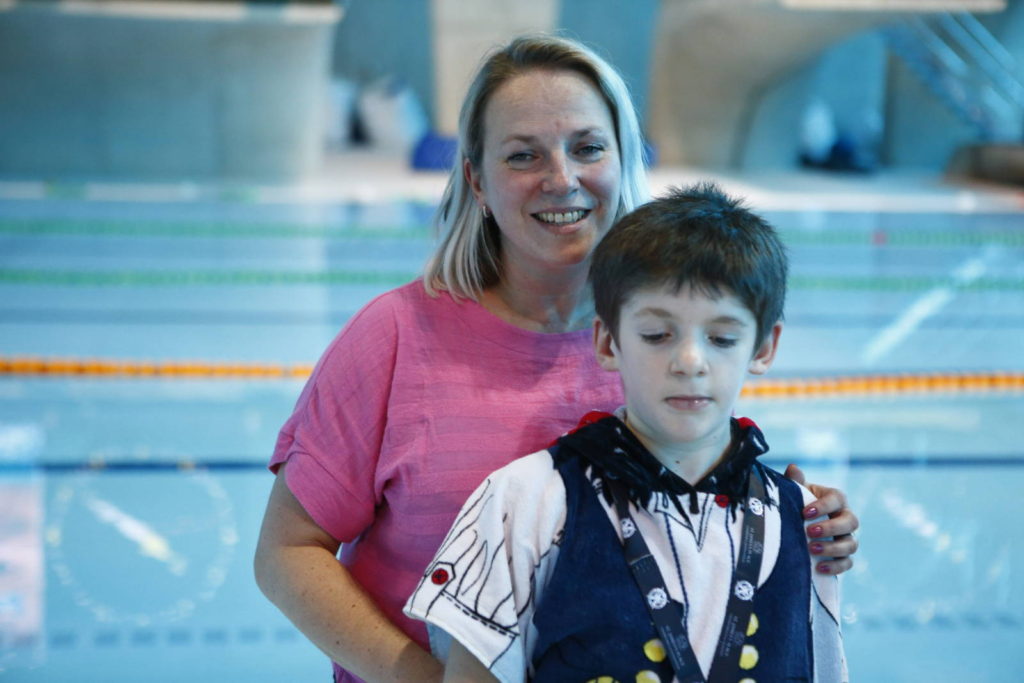 Watching on was Irena Banham, mother of Jack (pictured) who was competing for North Primary School from Colchester. She said: “Originally I’m from Croatia and there they just don’t have these things. Disabled kids are usually just pushed aside, so it is absolutely amazing to see disabled kids accepted, embraced and included here. It makes me so emotional.

“I would take Jack to every single Panathlon if I could. He has been to two or three but this is his first swimming experience. He is ecstatic when he knows he is going to Panathlon. He couldn’t sleep last night. This is just huge for him.”

Although this was North Primary’s first Panathlon swimming gala, they have entered multisport and boccia events before. PE coach, Lisa Eves, revealed that she had bought kurling and boccia equipment for the school (courtesy of a parent’s kind donation), having recognised the impact the sports had had on the school’s disabled and SEN students at Panathlon competitions.

“Panathlon shows that everybody can achieve, no matter what level they’re at,” she reflected. “Seeing what they can do, my heart swells with pride. It’s really humbling, because children are so resilient. It instills a positive attitude in them which we reinforce by celebrating their achievements in assembly and in our newsletters.”

Seventh-placed Burnham on Crouch Primary were recently shortlisted by Active Essex in the Education Champion of the Year awards, held at Chelmsford Racecourse in December. The school’s nomination was for the opportunities they provided in PE and sport from Reception right up to Year 6.

“Panathlon played a huge part in that,” revealed PE teacher Alan Proudfoot. “We come here for the swimming final every year, and we do ten-pin bowling and boccia competitions too. The availabiity and access is so fantastic.

“For our kids, it’s a huge self-esteem boost. These are children who won’t come to football training or tag rugby and are almost scared of the opportunity to represent our school in sports. We’ve got a young lady who has never been to one of these events and it’s made her day. She struggles academically because of her various needs but here she’s buzzing and super excited. Because the pressure is taken away here and the environment is much more relaxed, she feels a lot more comfortable giving it a go.”

For Jan Banks, a Learning Support Assistant at sixth-placed Beckers Green Primary, it was also her first Panathlon experience, despite having been at the school for 20 years. “A few years ago this never happened and it’s so wonderful now that lots of children can come and feel as though they are achieving something,” she said.

“This is a great way of them being able to do it. I’m in awe of it, actually. They’re proud of what they’ve done. Academically they might not be the best, but at this they can achieve.”

The day’s trained Young Leaders were from Burnt Mill Academy– a long-time and trusted source of excellent young people who help officiate and run our events in London and Essex. 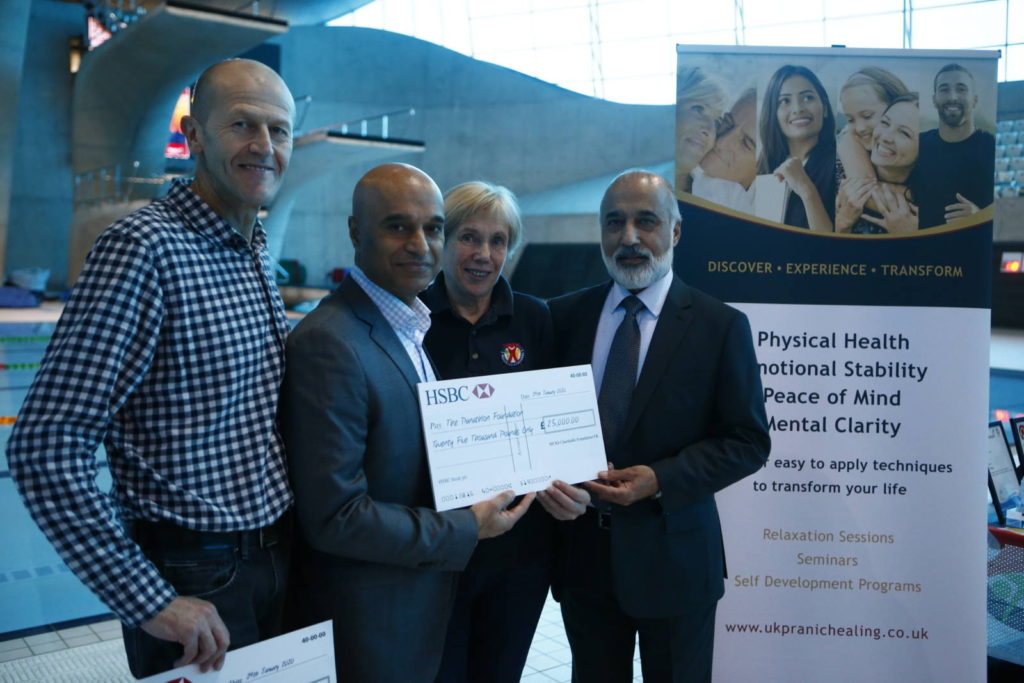 After the final, Panathlon was presented with a cheque for £25,000 by new funders, the MKCS Charitable Foundation, which will help fund Panathlon’s primary-age activity.

The Foundation is funded by donations from the earnings of 3,000 Pranic Healing students nationwide. Panathlon staff were treated to a short pranic healing session after the competition had finished!