In June the Copper Box Arena in the Queen Elizabeth Olympic Park played host to the highlight of the 2015 Panathlon calendar – the London Panathlon Challenge final.

Panathlon had a camera crew on hand to capture the excitement of the day, as 175 competitors from 19 schools across eight London boroughs battled it out in the state-of-the-art London 2012 venue.

Alex Brooker, star of Channel 4’s ‘The Last Leg’, said: “You talk about legacy from the Olympics and Paralympics and I don’t think there’s any better showing of it than this.

“As soon as I found out about Panathlon I wanted to be involved, because when I was in school there was nothing like this about for me and other disabled kids. There was no big, inclusive event – not only that, but a proper competition!”

“You look at an event like this and, yes, it’s so inclusive, but that doesn’t mean kids are just here to have fun. They want to win and that’s what I love about it. I love a competitive edge – everyone’s got one.”

Steve Brown, Team GB wheelchair rugby captain at London 2012, said: “Panathlon works so hard at making these opportunities happen. You’ve got to remember there are over 6,000 individuals taking part in this, 450 schools across the country. It’s fantastic.”

The London finals were the culmination of months of Panathlon competition in the capital, that saw 1,500 students from all 32 London boroughs compete across 16 qualifying rounds, with the four regional winners of both the champions and plate competitions coming together for the Olympic Park finale.

“This really is the pinnacle of the Panathlon Challenge competition,” said Panathlon ambassador Liz Johnson. “The fact that we’re at the Copper Box, in the Olympic Park, that gives the children an extra special incentive.” 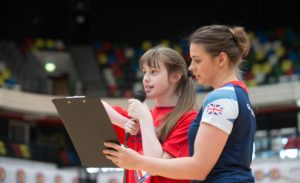 Liz, who took the Paralympic oath at the opening ceremony of the London 2012 Games, was again inspired by the Panathletes she met, including 14-year-old Georgina Hart, who took the Panathlon oath before the final, on behalf of all the competitors.

“Georgie has just signed up for a Duke of Edinburgh Award,” said Liz. “The first time I met her she wasn’t even sure she wanted to be at Panathlon, so that’s a massive step forward.

“That is inspiring for me to stay involved and keep developing Panathlon with everyone involved, so that other children get the opportunities out of sport that I got from my Paralympic career.”

Alex, who tried his hand at a polybat and the precision beanbag, was equally thrilled to be able to attend his second Panathlon finals.

“If it wasn’t for Panathlon some of these kids might not be taking part in games sessions or taking part in sport and that’s completely wrong. For any kids who are at home thinking about getting involved in Panathlon – do it! I don’t think you can lose out.”​

We've got that #FridayFeeling with this one! 🎉