Nearly 200 disabled children from 21 schools across London took part in Panathlon’s annual multi-sport final in June, held for the first at The Copper Box Arena in the Queen Elizabeth Olympic Park. 16 Qualifying competitions took place between November and April to decide the 8 London Boroughs to compete for the Champions trophy and for the first time, a new Plate Final for the runners up in the earlier rounds.

Students from two Harrow-based schools – Whitmore and Shaftesbury High School – came together and won five of the day’s six sports to claim victory over teams from Sutton, Barking & Dagenham and Bromley in the Champions trophy.

“It feels awesome to win and retain our title – the children have absolutely loved it,” said Rob Manners, a teacher at Whitmore High School. “If it wasn’t for Panathlon the children wouldn’t be able to take part in competitive sporting activities. I would encourage every school to take part in a Panathlon.” It is a fantastic opportunity for pupils to experience a range of sports in a competitive environment. This event promotes a sense of achievement in my pupils and heightens their self-esteem. ”

Among the Whitmore students to have benefited from competing for Harrow in the Panathlon Challenge, is 18-year-old Kotetsu Suguwara. 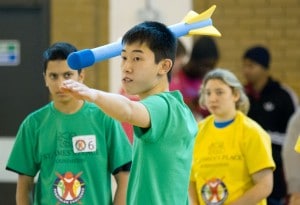 Kotetsu is a Special Educational Needs student who has autism. When he first arrived at Whitmore High school in 2009 he was socially isolated, had very low self-esteem and refused to take part in any form of physical education. But since getting involved in Panathlon, he has come on leaps and bounds, both in and out of the sporting arena.

“Kotetsu found his niche and realised he had natural talent when competing in Panathlon. Due to his obsessive nature he practised and practised and currently holds several Panathlon records,” said Jannine Edwards, who works at Whitmore School.

“His social skills have dramatically improved, and now instead of watching his favourite sport on television he has joined a rugby club and plays competitively.”

Jannine said: “I could go on forever about how Panathlon has helped Kotetsu and on behalf of his family and Whitmore High School a massive thank you to Panathlon. After a fantastic three years at School, Kotestu is off to University in September ”

Warren Marriott, a teacher from Perseid School in Merton said: “We’ve been coming along for many years – we absolutely love Panathlon. Our kids love competing against other children from other special schools.”

Warren praised Panathlon for its ability to bring children together in sport at such an iconic venue. He said: “The building alone mesmerizes them, so even if we don’t win, we are chuffed to be here — to take part at an Olympic venue like this is even more special, because they would have all seen it on the television.” Warren added: “The kids are really enthusiastic about coming in and being able to take part in an adapted sport. For special needs children to be amongst children with similar abilities – I think that’s the biggest thing. “I hope that some of them will have associated this venue and this experience with the Olympics that took place here — after all, Panathlon is their Olympics and Paralympic Games.”

The pupils from six Barking & Dagenham-based special schools joined forces to compete at the multi-sport event, finishing the day in second place behind champions Harrow. 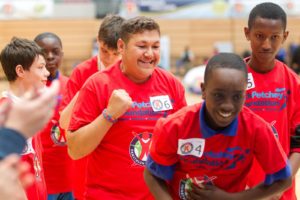 Luke Hammit, a teacher at Trinity School and part of the Barking & Dagenham team, was delighted with how his pupils had performed and had come together with five other special schools from across the borough.  He said: “I’m so thrilled with how all the pupils have performed today, being able to mix with other children from other special schools in an atmosphere like this is just fantastic for them.” He said: “Panathlon is the most engaging competition in the country, there is simply no other competitions like it. It allows them to compete in sport on an equal footing, which I believe is so very important.”

The Bromley Team was made up from three schools – Riverside, Marjorie McClure and Glebe. Guy Wilkins, the co-ordinator for the Bromley Team, was thrilled to have made it to the final and to see the excitement on his students’ faces.

Guy said: “We are delighted to be here today at The Copper Box Arena, the children are so excited about being here – they haven’t stopped smiling.  Only through Panathlon can disabled children win medals and compete at an Olympic and Paralympic venue, and that’s something very special,” said Guy.

One student to have benefitted significantly from their school’s involvement in the Panathlon Challenge is Liam Kirk from Riverside School. Liam was instrumental in helping Bromley win their first round of the Panathlon competition and won silver and gold medals in New Age Kurling, Precision Bean Bag and the Relay Races.

Speaking of the effects Panathlon has had on Liam, his teacher James said: “Liam has ASD. As part of his autism he struggles to interact as a member of a group and finds it difficult to communicate verbally. Despite this Liam has excelled in sporting activities, particularly in Panathlon. “Liam ran in a relay with three students from Glebe and Marjorie McClure School – a particularly significant achievement for him considering he has very little interaction with students from Riverside, let alone other schools.” 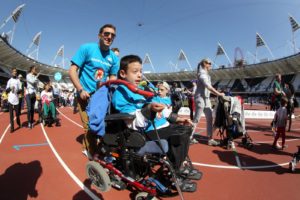 in the Plate competition, winning the Polybat event and coming third overall.

Having attended a number of Panathlon events in the past, Neal Collard, a teacher from Charlton Park, said: “The students absolutely love it, it’s something completely different for them. Although they do sports lessons in school, this is an event with a competitive edge to it, which they don’t often get and against people that they have never met before, which is a benefit in itself.”

Neil praised the format of Panathlon and the rewards it gives the children: “They say compete to learn and learn to compete and this event really emphasises that –everyone is respected for taking part, regardless of their ability, which is great. Through Panathlon, some of our competitors were the first disabled racers on the Olympic Track in an official test event in April 2012, before the Olympics and Paralympics.  “To say that they’ve been to another Olympic venue as well is fantastic, the main Stadium and now the Copper Box — the kids would have never had those opportunities otherwise. it’s brilliant.”

Martin Owers, a teacher from Seven Kings School in Redbridge, was thrilled that Redbridge won the inaugural Plate Competition.  He praised Panathlon for its format. He said: “It’s great to come to the final and take home the trophy, I’m just so happy for my students. “The competition is getting better and better every time. I think the addition of the plate competition was a wonderful idea – one that my pupils and I are extremely grateful for.”

Martin said: “It’s amazing how many children get to compete in Panathlon over the year. Sport is so important for all children and to have a competition for disabled children is just fantastic”  One student to have benefited significantly from their school’s involvement in the Panathlon Challenge is Abdul, from Seven Kings School and part of the winning Redbridge team.

Abdul, who took part in Table Cricket and the Athletics Races, was full of excitement about the day and thankful to Panathlon for its sporting opportunities.

“I am a real cricket fan, so being able to play a form of the game was just fantastic for me. I’m so proud to be representing my local community and even more proud because I’m representing them playing sport.”

Explaining his love for the competition, Abdul said: “You get to meet and talk to different people; you get to see how people try so hard to get what they want and to win medals — I can’t wait to come back next year and hopefully win another trophy!”