Ormiston Denes Academy, of Lowestoft, and John Grant School, from Caistor, were the victors when nearly 120 disabled students took part in the Panathlon North Suffolk Multisports Finals in Lowestoft on Wednesday.

Ormiston Denes won the pan-disability contest at the Waterlane Leisure Centre, while John Grant were champions of the physically-disabled event.

Ormiston Denes’ Head of PE, Stuart Aldous, said: “This has been an excellent experience for everyone involved today and a great boost for all the pupils and staff.

“They look forward to it for a long time. I see pupils today that are the happiest they have been all year.”

Pupil Ellis Moore, 13, said all the events had been very good. He loves to catch up with old faces from other schools whom he has met before.

Over 60 children took part in the pan event. In second place, four points behind Ormiston Denes, were Pakefield School. Joint third were Bungay High School and East Point Academy with 42 points, with The Ashley School in fifth on 34 points.

East Point School Head of PE Ashley Willis said: “Panathlon has done a fantastic job giving opportunities to pupils who don’t normally get in a minibus and compete. We originally hosted the event, but it is great that it has got so big we have now had to come to a bigger venue. Our school learn so many skills from Panathlon days, from teamwork to confidence. Due to Panathlon, we now run Panathlon games in class and we have started events for able-bodied pupils too. Ofsted attended last year’s finals we hosted and were impressed how much impact it had on such a cross-section of pupils. We hope to run another event with Panathlon at our school for the area.”

Pakefield High School teaching assistant Sarah Cropley said: “We won the final last year so the pupils have been determined to bring back the trophy. Our SEN students wouldn’t normally compete at school, so to get this chance is amazing. We now have boccia clubs at school. Panathlon is a massive, positive influence and we seek to get involved as many times as we possibly can.”

Bungay High School PE teacher Lorraine Nabarro said: “The pupils are excited to be here. We look forward to Panathlon events, It is great they are engaging with other pupils, which they don’t normally get . They are all very supportive of one another. It’s more than just PE – it’s social skills too.”

Meanwhile, John Grant scored 50 points to win the physical event by four points from the Super Stars, made up of competitors from The Ashley, Pakefield and Ormiston Denes. Third were Warren B and fourth Warren A.

John Grant PE coach Sarah Miller said the event and win had been amazing. “It has been great to be all together as a class and work together as a team to do something,” she added.

“It’s different with Panathlon because pupils of mixed abilities can take part, instead of just the higher achievers.”

Two years ago Lee Philpott, 14, had never won a medal. Now he is able to compete from his electric wheelchair.

He said: “I love getting to hit the ball really hard in polybat and enjoy the boccia.  It’s a lovely experience.”

North Suffolk School Games Organiser Jeffrey Hoey said the Panathlon Challenges are invaluable for enabling disabled children in the mainstream secondary schools to compete with those from the special schools.

“This is fantastic because the games are all inclusive and engaging for all,” he said.

Tony Waymouth, Panathlon’s Chief Operating Officer, praised Jeffrey for the enormous amount of work he puts in at the schools and for the progress the schools have made .

“It made sense to have two competitions in North Suffolk so there is a level playing field for competitors at all levels. It gives them the right competition,” he said.

“It also means some kids who weren’t able to compete in the past have had the chance this year.

“It is great to see this part of the country moving forward and providing a stepping stone for Panathlon to further build for 2017.

“We hope now to replicate a further level of competition incorporating North Suffolk and Norfolk later in the year.”

Tony thanked sponsors the Emma Holloway Foundation and the Mason Trust, adding: “We wouldn’t have been able to put this on today without their support. And the level of support has grown. They are two foundations that are intrinsically linked with the success of Panathlon in this part of the country.”

The day’s Young Leaders – who helped run all the events – were provided by Lowestoft Sixth Form College (pictured right). 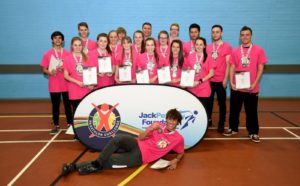 The college’s sports development officer, Sam Clarke, said: “We pick students who do a good job who are studying sports at BTEC level or A level.

“It’s good for their CVs prior to going into teaching or coaching, or outdoor sports careers.”

One of the leaders, Matt Doran, 16, is planning a career in outdoor education, hopefully in Scotland. He said: “This is a great opportunity for all of us to learn to cooperate with others and build new networks and friendships. It’s great to see the schools in the area working together so well.”

For a full set of photos from today’s competition, click on the image below. 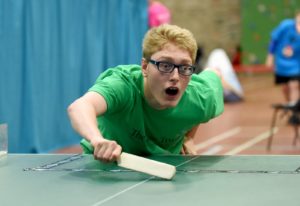