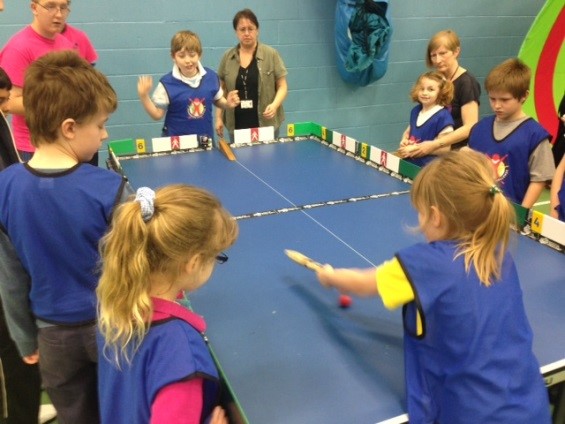 On the 2nd April, Panathlon held a Primary Panathlon competition at Abingdon School, Oxfordshire. As part of Oxford’s School Games Festival, Panathlon delivered a competitive Primary competition to 42 students from 5 different schools in the surrounding area. These 5 schools made up 6 teams who would each try to win the Gold medal; Bishopswood School (A & B team), Kingfisher School, John Watson School, Fitzwaryn School and Springfield School.

The students, who were completely new to the majority of these games had the chance to compete in 8 different activities including, Boccia, Kurling, Flight Path, Table Cricket, Volleybat, Precision Beanbag, Parachute Popcorn and Football.

“Today was very well organised and a lot of fun. It’s been accessible for all our students and it’s also been a great opportunity to meet other schools. Furthermore, we’ve had the chance to try a range of new sports and it’s been brilliant for our pupils to follow simple rules and work as part of a team.”
– K Jones, Teacher at John Watson School

“This is the first time we have ever worked as a competitive team and we would love to come again.”
–Sarah Blundell, Teacher at Bishopswood School

After a fantastic day of competition which brought out qualities such as teamwork, sportsmanship and determination it was Fitzwaryn School who struck Gold with an impressive team display in Boccia Blast. Second place was awarded to Springfield School just ahead of bronze medal winners Bishopswood A Team. A huge thank you must go to the 15 leaders from Abingdon & Whitney College and King Alfreds Academy who helped run each of the activities.