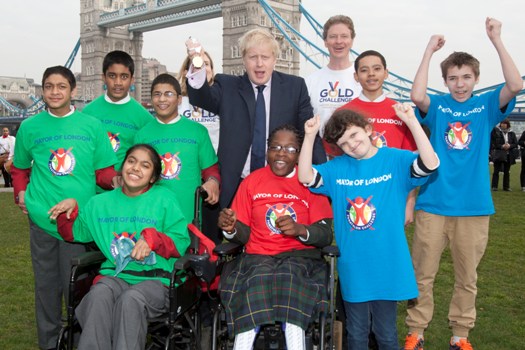 On the day that London marks just six months to go before the London 2012 Paralympic Games, Mayor Boris Johnson, announced today that disabled children from across the capital will get the unprecedented chance to take part in a unique sporting event at the Olympic stadium next month . The unique event is hosted by Gold Challenge, the UK’s only Olympic and Paralympic sport charity challenge.

Twenty children, four from each of the five Olympic and Paralympic host boroughs, will be selected to take part in the ‘Mayor’s Race’ .

The Gold Challenge event on April 1, which will also feature Team GB ambassadors, celebrities and hundreds of representatives from schools and charities across the capital, will see the children taking part in a special opening ceremony parade around the track, alongside 4,000 adults and other young people.

The children will be chosen by the Panathlon Foundation, the Mayor’s partner charity which runs multi-sport competitions for young disabled people across every London borough. Panathlon is funded as part of the Mayor’s £40 million 2012 Sports Legacy Programme, which is encouraging thousands of Londoners of all ages and abilities into sport.

The fund has seen substantial sums invested into projects that are focused specifically on disabled people, including the Panathlon Challenge (£250,000), the British Wheelchair Basketball London Development Programme (£95,000) and the Cricket for Change ‘Hit the Top’ programme (£180,000).

Importantly, the Mayor requires that every sports participation project he invests in adopts his action plan for increasing participation amongst disabled Londoners. So far, fifty major organisations – including London Boroughs and National Governing Bodies – have adopted the ‘Inclusive and Active’ action plan, which is creating a step change in the way that sport is delivered in London.

The Mayor of London, Boris Johnson, said: “Th is fantastic event will be held in one of the most stunning venues in the world and will give disabled children from across London the sporting experience of a lifetime. Getting people of all ages and abilities into sport is a top priority of mine and it is through the sterling work of organisations such as the Panathlon Foundation and Gold Challenge that we can make this happen. I am sure the day will provide a wonderful taster of what is to come later this summer when we welcome the world for the Olympic and Paralympic Games.”

Dan Thompson, Executive Chairman and Founder of Gold Challenge said :, “We have really enjoyed working with the Mayor’s Office to select the participants in the Mayor’s Race and the Panathlon Foundation really is a wonderful charity. It is going to be a fantastic day and a unique way of saying thank you to our participants who have been inspired by London 2012 to get active and raise money for charity”.

Ashley Iceton, CEO of Panathlon Challenge said, “We can’t thank Gold Challenge and the Mayor of London enough for giving the severely disabled children we work with the opportunity to compete on the Olympic and Paralympic track. This really is the stuff dreams are made of. We are delighted our Panathletes will be the among the first disabled children competing in the stadium.”

– For further information about the event on April 1 please contact Fiona Miller Smith on fiona.millersmith@goldchallenge.org or 07980 764540

Tickets for the day are now on sale at http://www.ticketmaster.co.uk/Gold-Challenge-tickets/artist/1683319.

– As well as the Mayor’s Race, a further 1,000 people who have been inspired to take on the Gold Challenge and raise cash for charity, will be taking part in 100m races on the track throughout the day.

About the Mayor’s Sports Legacy Programme

Of the £15.5 million fund, a total of £7 million is being channelled into facilities; £3 million into training new sports coaches, volunteers and officials etc; and £5.5 million into a range of new projects and programmes aimed specifically at increasing participation amongst Londoners.
– To date, £14m has been invested, with over £25m of match funding pulled in.

In summary, the impact of investment to date is as follows:

– Capacity created for an additional 37,000 users per week

Mayor’s Skills Investment Programme
– Training programme for those wishing to become coaches, volunteers, officials or for potential employees within the sport and active leisure sector

– Trained up over 9000 individuals in a range of sports, right across London

– Resulting in over 25,000 volunteer hours pledged to community sports in London

– 33 projects funded – from BMX to dance to rugby

– Some projects focus on pure participation; others use sport as a means of helping tackle specific social issues

– Total number of beneficiaries expected to exceed 200,000; with more than 10% of these previously having been considered ‘inactive’
Freesport

-Each year around 17,000 Londoners receive at least 6 hours of free coaching through this programme

‘Make a Splash’ mobile pools
– Mobile pools are deployed in six different locations each year, for a period of approx 3 months in each location

– Pools are staffed with teachers all day and evening, 7 days a week

– Programme teaches over 6000 Londoners to swim each year

– About Gold Challenge: www.goldchallenge.org Gold Challenge is an independent social enterprise and works with the British Olympic Association, Sport England, sportscotland, Sport Wales, ParalympicsGB and the National Governing Bodies of the Olympic and Paralympic sports. The organisation encourages people to take on an Olympic or Paralympic sport and raise cash for charity.

– It is part of ‘Places People Play’, the official mass participation legacy programme for the London 2012 Olympic and Paralympic Games. By the end of 2012, Gold Challenge aims to have encouraged 100,000 people to complete personal sporting challenges, raising millions of pounds for charity in the process.

– More than 150 charities are Gold Challenge partners including Golden charity partners Scope, Right to Play, NSPCC, Cancer Research UK and Oxfam. Anyone can register for free at www.goldchallenge.org, choose the 2012km challenge and the charity they want fundraise for from the 150 charity partners.