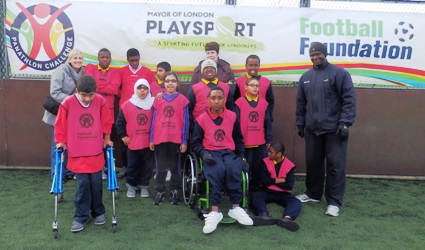 The new Panathlon year kicked off with 75 disabled footballers competing at Goals Wembley in the “West London” Panathlon football competition.

This year around 500 disabled footballers will take part in Panathlon, across a range of impairment groups, including severe learning difficulties, visually impaired and powerchair users.

5 West London Boroughs competed today in under 13 mixed and Under 16 boys football and they were Hammersmith & Fulham, Ealing, Hillingdon, Brent and Harrow.

20 matches produced 146 goals which resulted in Ealing taking the honours in Group 1 and Hillingdon winning Group 2. Points will be carried forward to their multi-sports events taking place shortly.

All teams had been prepared By Brentford FC Community Trust who are delivering the Panathlon football training for Panathlon in West London.

This is the first of around 50 Panathlon competitions in the year ahead. We’re off to a flying start !