Four new schools got their first taste of Panathlon today as more than 130 disabled young people competed at Stoke Mandeville Stadium, the birthplace of the Paralympic Games.

Pupils from 11 schools across five counties battled it out in back-to-back competitions at the Panathlon regional invitational event, which brought together Panathlon newcomers – from Warwickshire and Buckinghamshire – and a number of returning Panathlon schools.

It was a debut to remember for the Warwickshire team as the students from Myton School in Warwick and Campion School in Leamington Spa claimed first place in their first ever Panathlon competition.

Panathlon regulars Arbour Vale School from Slough also had a memorable day as they swept the board with a perfect score of 60 points on the other side of the curtain in the Guttmann Centre – named after Dr Ludwig Guttman, founder of the Paralympic Games.

“It’s amazing. I’m so pleased for these guys,” said Kevin Hughes, assistant head of PE at Arbour Vale School. “A lot of our students today have never been to Panathlon before, so I’m so happy for them. Some of our staff are crying – the ones who’ve not been here before.”

“For us being able to come down and take part in these events is brilliant. We’ve been successful over the years, but we’ve new students coming in all the time and we’re also trying to bring through a younger age group through the Primary Panathlon.

“Panathlon is so good because it is aimed at students of all abilities. Some competitions we go to are looking the more elite students, but here everyone has the opportunity to experience that competitive edge against their peers. It’s brilliant. The children love it.” 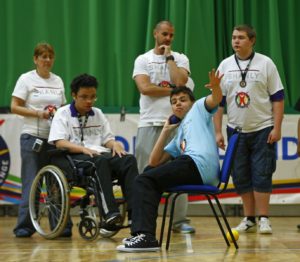 In the day’s other Panathlon, the new partnership between Campion and Myton Schools proved to be a formidable one, as the team won four events – boccia, new age kurling, polybat and field athletics – on their way to winning a debut Panathlon title for Warwickshire.

“It’s nice winning it and a lovely feeling for them, but we’d have gone back happy whatever the result,” said Ali Knight, PE teacher at Campion School. “They won’t forget today. We have a few days in our sporting calendar throughout the year and this is one that they’ll remember.

“A lot of them were very hesitant when we arrived and didn’t want to be involved, but within 15 minutes of being here that completely changed. They wanted to get their t-shirts on, be a part of it and they really engaged.

“Gaining confidence from being in a different environment to school really helps them and teaming up with another school, working together and making new friends is great. It’s not just sport; there’s a whole social element that has really helped our students. They are loving it.”

Paul Somers, disability & learning support worker at Myton School, said: “It has certainly championed the word inclusive. It’s been a very inclusive day and the atmosphere had been absolutely fantastic, positive and friendly.

“It’s our first Panathlon and as you can see the team is overjoyed taking part. They were looking forward to the day and they got just what they wanted. We hope to be taking part in many more Panathlons.

“Some of the sports here today are new to us but, those that we haven’t taken part in before, we’ll take back to school, get the equipment and endeavour to get it put into our PE class.” 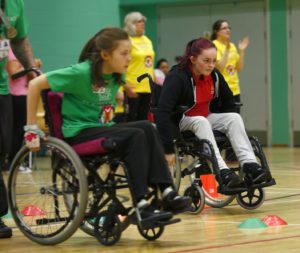 Kealey Bradshaw, aged 15, pupil at Myton School: “It’s been good. There are lots of different activities, I’ve played boccia and the precision beanbag throw, which is new to me, so it’s been really good.”

Kealey (pictured left in red) won gold in boccia and silver in precision beanbag to help her team to victory.

First place finishes for Northamptonshire in the field athletics and South Buckinghamshire in table cricket helped them to overall second and third place, respectively, while Aylesbury finished fourth.

A full breakdown of results from both competitions is available in our results page, while you can view action from the day in the photo gallery below.

Thanks to our leaders from Sir Herbert Leon Academy in Milton Keynes and Manor School Sports College in Wellingborough, who did a fantastic job overseeing the two competitions.

Thanks also to our funders the Shanly Foundation, the St James’s Place Foundation and the Peter Harrison Foundation for making the event possible.