Team Panathlon – inspired by thoughts of the children they were running for as they battled bitterly cold conditions for the 26.2 miles – all completed Sunday’s London Marathon.

Chris Buckley led the way on four hours 11 minutes, while Tim Richmond (4:36) and the husband and wife team of Andre and Cheryl Ellis (4:58) (pictured above) also crossed the finishing line in under five hours.

Andre said: “I felt pretty comfortable and it was great to run with my wife, who ran her PB, so we’re both pleased.”

Andre is a partner at John Lewis Stratford City, who have been supporting Panathlon for nearly four years.

You can support Cheryl and Andre by visiting their fundraising page.

Tim has been involved with Panathlon for over 10 years as a teacher at Linden Lodge School in Wandsworth, but this was his first marathon.

Tim (pictured above left) said: “I’m really proud to have run for Panathlon, as it is such a worthy cause. “I’m delighted to have finished my first marathon in four and a half hours, and would like thank all my family and friends, who have helped me raise over £1,000 for Panathlon.”

If you wish to support Tim further, please visit his fundraising page. 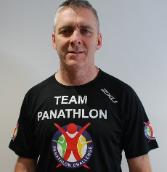 Chris, who helps Panathlon’s communications through The Content Factory, is a veteran of several marathons, but this was his first London Marathon.

Chris (pictured left) said: ‘The London Marathon is a very special event and being able to represent and raise money for Panathlon made it even more special.

“At the various points in the race when I started to struggle (and there were quite a few of them!) I just thought of some of the inspirational young people I have met at Panathlon events and it gave me the extra determination I needed.”

If you wish to support Chris, please visit his fundraising page.

Panathlon is also delighted to work with the organisers of the Mini-Marathon, who cover the same route on the same day, starting at the 23-mile mark in the City and racing past Big Ben on the way to the Mall and the official finish line.

This year there were a record-breaking 42 entries in the Mini-Marathon wheelchair race, including a veteran of many Panathlons, Michael McCabe, who came third in the boys’ under-17 race.

And, in a new venture, ambulant runners also took part along the three-mile course. Malik Berbiche (pictured right), who in March helped Hillingdon qualify for the Panathlon London Finals at the Olympic Park in June for the first time, raced for the first time and came across the line in 31mins 28secs.

Malik, who last week won one of the Children of Courage Awards, was delighted to run further than he has ever done and cannot wait to do it again next year.