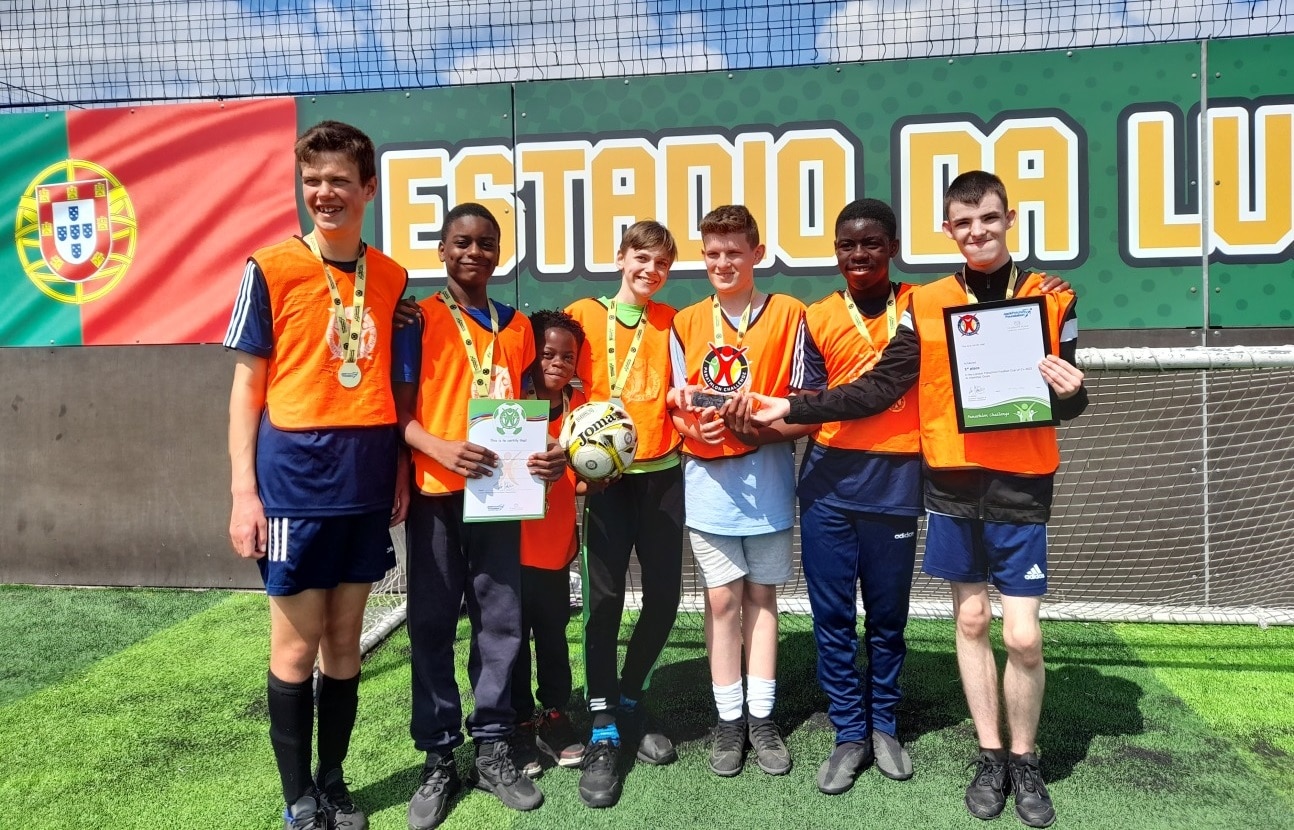 Panathlon’s London Football programme built towards its climax at Wembley on May 19 with two recent events – a ‘Higher Ability’ Finals and a Plate Final for schools who finished runners-up in the first round.

Nine schools comprising 101 players took part in our Higher Ability Finals at Wembley Goals Centre on May 5 in scorching weather.

Link Secondary School (pictured above) pipped Cricket Green A to the Under-13 title, West Lea took the gold medals in the Under-16 category with Lansdowne School winning the Under-19s title.

The following day, PE teacher James Blanshard from U13 champions Link Secondary got in touch to say: “All of yesterday’s participants are walking the corridors today with their medals on. They now probably carry more kudos at our school than Olympic medals!

“Thank you so much for having us to your events. The kids had a great day and a few more have joined our after-school football club today as a result which is brilliant.”

Victor Carrizosa Exposito from Paddock School (their U19s team pictured above) added: “As always, it has been an absolute pleasure to join in the matches. We really appreciate your flexibility with our Paddock students.”

The following week, the weather had turned from bright sunshine to persistent rain, but that didn’t dampen the enthusiasm of 98 players from eight more schools who took part in our London Plate Finals back at Wembley Goals.

Zain Jaffer from our funders BlueBay Asset Management (pictured above in mauve top with the Alexandra Park team) volunteered as a leader on the day.

Bren Amooty from Alexandra Park School (winners of this year’s Panathlon Jack Petchey Foundation Special Recognition award) said: “Both our teams and staff had a great day despite the weather and really appreciate what a well-run and positive experience today was.

“The children were singing on the bus most of the way home. We had several students who played in their first football competition today and they loved it. All the teams were so friendly and staff were happy to let the kids just play, which was refreshing.”

Dan Cayford from runners-up Parayhouse School added: “It was a fantastic day, as always. The children are already talking about next year! Well done to all the teams and congratulations Alexandra Park!”

Our London Football programme, supported by the Jack Petchey Foundation, is making its comeback this year for the first time since November 2019 due to Covid-19.

We thank the Jack Petchey Foundation immensely for their support and look forward to seeing our eight finalists at our showpiece London Finals on Thursday May 19 back at Wembley Goals!