A west London school has raised over £1,600 for Panathlon in a special charity fundraising event.

Coteford Junior School in Hillingdon chose to dedicate their annual fun run and duathlon – which involves a combination of running and scooting – to raise funds for Panathlon, having been involved in the programme themselves for over a decade.

“As a school we have benefitted from Panathlon for many years now,” said Coteford teacher Kate Pendred. “Our children go to the Panathlon events three or four times a year, so we just felt this was the right time to give something back.”

A fantastic effort by the Hillingdon school saw all 267 pupils get involved in the sponsorship drive ahead of the 6th November event, raising a total of £1,670 to help Panathlon provide sporting opportunities to more disabled young people.

“The kids really enjoyed the day and they did loads of work in the build-up to get people to bring in their sponsor money,” said Pendred. “We’ve been doing a fun run for quite a few years and the duathlon for the last couple of years, but this year I thought it was nice to do it as a sponsored event.”

That decision proved of great benefit to Panathlon as a terrific sponsorship effort saw the school raise their second largest amount ever for a charity or good cause. Every pupil took home sponsorship forms while a dedicated team drummed up publicity in the weeks leading up to the event. 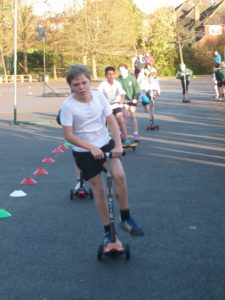 On race day every pupil got involved, whether in wheelchairs or buggies, using walking frames, pushing scooters or on foot.

Each race was run in two sections – Years Three and Four raced together before Years Five and Six took their turn – making four races on the day in total.

Pupils using wheelchairs or frames joined in during the duathlons, doing three or four laps of the playground as they were able.

Coteford has been involved in Panathlon for around 15 years, taking part in the swimming, boccia, multi-sport and Primary Panathlon programmes. The school has even hosted two recent primary Panathlon events, with staff trained by Panathlon staff to help run the event.

“Panathlon is so part of our school, we just felt it was a chance to give something back,” added Pendred

“It provides such a confidence boost for the children with disabilities, to be able to go out to events, compete and win medals, just like the able-bodied children. It’s amazing.”

Panathlon Ambassador Liz Johnson, who visited Coteford for the Hillingdon Primary Panathlon in April, said: “On behalf of Panathlon, I would like to say a huge thank you to everyone at Coteford Junior School for such a fantastic fundraising effort.

“This really will help to make a difference to the disabled young people that Panathlon works with, just like those Coteford pupils I met earlier this year.

“Panathlon has made such a positive contribution to Coteford School, but it’s fantastic to see the whole school come together and give something back.”

You can view more action from Coteford’s fundraising day in our photo gallery (left).