Panathlon “has given me a better future”

Matthew Key has credited Panathlon with igniting his transformation from self-confessed “couch potato” into an ambitious young boxer.

The 15-year-old, a pupil at West Lea School in north London, was part of the Enfield team that won silver medals at our showpiece 2018 London Multisport Final at the Copper Box Arena. He was also named runner-up in our 2016 Jack Petchey Foundation ‘Sporting Achievement’ award.

In November 2018, Matthew was invited to help present the awards at our Jack Petchey Foundation Outstanding Achievement awards at John Lewis Stratford, overlooking the Olympic Park.

Matthew admits that, in the past, his autism contributed to him being “sullen, angry and difficult” in PE lessons, but competing in Panathlon competitions turned around his attitude to sport.

“There’s no doubt about it, Panathlon has given me a better future,” he said. “It has let me focus that negative energy into something positive instead of just mucking about.”

Having had his enthusiasm sparked by testing out different sports and the thrill of competition, he went along to Finchley Amateur Boxing Club. 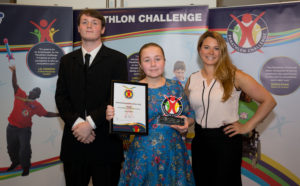 “One day, Anthony Joshua came in and sparred with me,” he said. “My nose started bleeding, but despite that I just wanted to keep going. My ultimate ambition is to get every belt in the heavyweight division. It is honestly Panathlon that has lit that fire in me.”

She commented: “To begin with Matthew wasn’t very sporty. He would sit out more than he would join in and be a bit sulky and difficult. Now you can’t stop him getting involved.

“He now swims, plays football and goes canoeing and it was definitely the driver for him to take up boxing. He’s got leaner and more confident. It was 100% Panathlon that made that difference and woke him up to sport.”

Speaking with his silver medal around his neck at the Copper Box Arena, awarded to him by Paralympic legend Tanni Grey-Thompson, Matthew expressed his pride at competing on such a prestigious stage.

“I idolise Olympians and Paralympians and to know that they’ve performed where I’m competing right now means a lot. It shows I’m following in their footsteps.”

Steve Brown, Team GB’s wheelchair rugby captain at London 2012, is one such Paralympian. The Panathlon Ambassador said Matthew’s journey is typical of many other young people who compete in our events.

“Once they’ve got that confidence they suddenly start to feel that because they enjoyed sport here, why can’t they enjoy working and playing with people of different abilities. It’s a starting point for them to blossom and feel comfortable in any environment.”