The number of disabled young people taking part in Panathlon events topped 10,000 for the first time in the 2015/16 academic year.

More young people with disabilities and special educational needs than ever before got the chance to engage in competitive sport thanks to our ever-expanding calendar of competitions and coaching days.

As Great Britain’s Paralympic team prepares for a fortnight of elite competition in Rio, Panathlon’s continued growth helps ignite a lifelong love of sport among thousands of young disabled people at grass-roots level.

The 2015/16 highlights included engagement in the programme for deaf students growing by 95% to 903, and the phenomenal success of Primary Panathlon events continuing since their inception three years ago. Demand was up by 65%, with 4,659 children taking part.

When adding the 1,590 students who qualified as Panathlon Young Leaders (a rise of 18%), the overall participation figure for the academic year was 11,673.

Coming just months after Sport England’s Active People Survey revealed a drop of almost 20,000 in the number of disabled people over 16 playing sport, Panathlon’s expansion provides hope that the next generation of adults will adopt a sporting habit that lasts a lifetime.

One sport in which Panathlon notably bucks national participation trends is swimming. More and more students are coming to our events at pools across the country, with an increase last academic year of 30% to 785 young people across 18 counties. 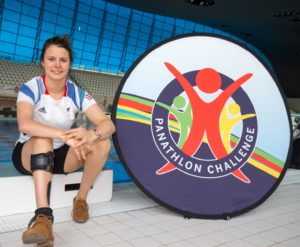 “To see the demand for Panathlon increasing is no surprise when you see the effect the events have on young people,” she said.

“Watching them during competitions is just fantastic; it lifts their confidence, expands their skills and makes them realise just what they’re capable of achieving.

“Many of these young people would not otherwise get the opportunity to take part in competitive sport. To see figures go past the 10,000 mark is wonderful news.”

Panathlon gives young disabled people not just the opportunity to take part, but also choices of which sport to try. It enables them to feel that sport can become a meaningful part of their lives, and that a future appearance at the Paralympics might not be an unrealistic dream.

As Richard Chiassario (pictured below and who will compete for Great Britain in Rio in the T54 wheelchair 100m, 400m, 800m and 4x400m relay) commented at a recent Panathlon event: “There was nothing like this available to me when I was a kid. I wish I’d had the opportunity that Panathlon gives these children.” 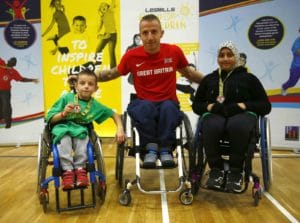