Panathlon continued its rapid expansion on Humberside on Tuesday as eight teams came together at Hull’s Costello Athletics Stadium for our inaugural Humber Primary Multisport Final.

Over 50 children from across Hull, East Riding, North- and North-East Lincolnshire got the rare opportunity to represent their schools and counties as Cambridge Park Academy, from Grimsby, won the special schools competition and Withernsea School, from East Riding, took home gold medals in a separate event for SEN students from mainstream schools.

Cambridge Park split into two teams in the special schools event and their orange team (pictured above) accrued 27 points, eclipsing both teams from Riverside School in Goole (20 and 16 points) and stablemates Cambridge Park purples (17).

Their victory seemed all the more admirable after Assistant Head/PE teacher Darren Gardner revealed that it was the first time they had ever brought their primary-age SEN children out of school for a sporting competition.

“The smiles on their faces tell the whole story. They are all loving it. The range of activities is brilliant,” he said.

“Coming out for the day is a big thing for students in special schools. It’s an opportunity to do activities that kids in mainstream schools would take for granted. A lot of our kids are bused in and bused home from school so don’t always have access to friendship groups, or get the opportunity to play out. This is massive for them.” 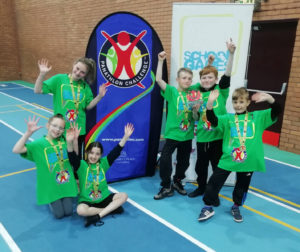 “We’re quite isolated out on the east coast and we struggle to find competition. We have inter-house events but most of the schools near us are tiny village schools with halls that double up as dining rooms and are barely bigger than a badminton court. To discover Panathlon has been fantastic.

“This gives our SEN students the chance of success and achievement whereas when they’re competing with their general class they often struggle.

“Taking part in sport can be quite daunting for them in mainstream because even though they may be achieving well for their level, they don’t feel like they are, because they are never going to match the standards of the best athletes.

“That’s why Panathlon is so marvellous for their confidence. They take pride in it here. We make sure their achievements are recognised in our Celebration Assembly on a Friday.”

Bellfield School, who finished eight points behind Withernsea in second place on 20 points, certainly didn’t lack for confidence. PE co-ordinator Tracy Cowap’s motto is, ‘We’re in it to win it!’

“We won the qualifying event three weeks ago to get here and the kids were absolutely bouncing when we got back,” she said. “We’d never done it before so we didn’t know what to expect. There isn’t a lot else out there for them which is a shame because we do like to do competitive games with them as often as possible.

“It’s great for their self-esteem and teamwork and it really brings them out of themselves. You see a totally different side to them.” 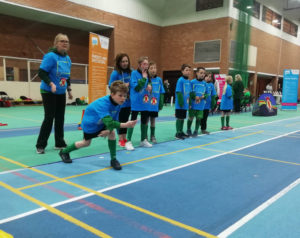 Bellfield pupil Oliver Brown, nine (pictured), said: “I think Panathlon is a great idea because it helps people to learn what sports they can do and how well they can do them. I’m going to put my medal in a big box wrapped in bubble wrap. Trying these sports is excellent because it shows you what you’re capable of.”

The event was jointly organised with Active Humber, and their School Games Development Manager, Jo McDonald, expressed her delight at the impact Panathlon is having on the region.

“At our mainstream School Games competitions we tend to see a lot of the same faces; elite kids who are very sporty and tend to dominate. Here, these children aren’t necessarily going to excel in that same way so for them to compete for their county is a really wonderful privilege.”

By next year, Panathlon and Active Humber hope to create more structure around the event, with winners of an initial inter-county round qualifying for this [Humber] level, and the winners of that then progressing to regional then national finals.

Hook School in Goole, having won their qualifying event six weeks ago, finished third in the mainstream competition today. Teacher Ben Tutty reflected: “They’ve been looking forward to this so much as they don’t usually get the opportunity to compete in mainstream sports events. They love representing the school and when they get their medals in assembly they feel so proud.” 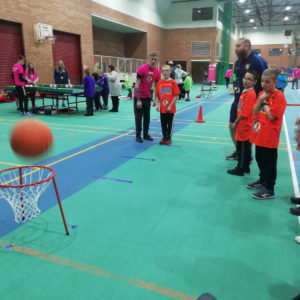 Student Ben Stevens, nine, said: “I enjoy it very much! I love representing the school and having fun. My mum has this box of things I’ve won and achieved and she will put my medal in there.”

Both competitions were run by Young Leaders from nearby Hull College, who volunteered as part of their studies for the NCFE Level 3 in Sport qualification.

“It’s an opportunity to gain some really good insight working with children with special educational needs. They get a lot out of it – risk assessments, coaching plans, organisation of the tournament, teamwork, communication and many other soft skills,” said course leader Mark Brown.