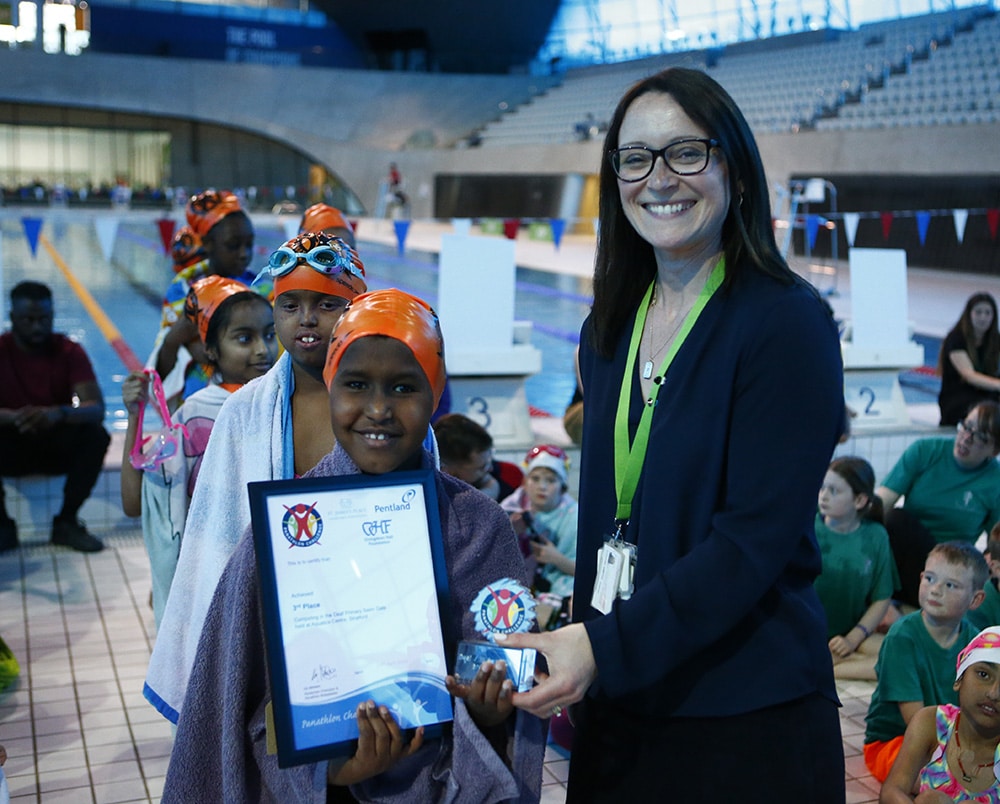 Panathlon plays a “priceless” role in sustaining the London 2012 legacy a decade after the Games, according to management staff at the Olympic and Paralympic venues.

The Aquatics Centre and Copper Box Arena in Stratford have played host to countless Panathlon competitions since 2012, helping to fulfil promises that the Games would leave a legacy of inclusive sports participation.

The Aquatics Centre alone has over one million visitors per year, including 3,500 children per week in its schools programme and 4,000 per week receiving after-school lessons.

Panathlon’s competitions, supported by our sponsors Pentland Brands, open up the spectacular, world-class facilities to thousands of children with disabilities and special needs, giving them priceless opportunities to gain water confidence and compete that they are so often denied elsewhere.

“Panathlon are such a lovely partner for us to work with,” said Louise Smith, Community Sports Manager for GLL, who manage the Aquatics Centre and Copper Box Arena.

“Their events are highly organised, everyone is really friendly and what the participants get out of it is obvious to see for anyone who attends. We are so pleased to welcome you back so frequently.”

Part of Louise’s remit is maintaining the legacy by opening up the venue to the community and increasing participation, especially amongst marginalised groups such as disabled people and older people.

“Panathlon’s events encompass many of those target groups including SEND children and the amazing volunteer Young Leaders,” she added. “They bring in schools in from all London boroughs and further afield.

“They’re coming in, being active, competing and having a great time. Watching them having so much fun is amazing. It’s wonderful they get this opportunity. Their reactions when they come in the building are priceless.”

Louise added: “You can look at other countries who have hosted the Olympic and Paralympic Games and their venues aren’t used at all. Here, 10 years on from London 2012, we are busy every day. We thank Panathlon for playing a part in that.”

Panathlon’s Chief Operating Officer, Tony Waymouth, added: “We thank GLL for being so accommodating in our use of this iconic venue which inspires children and shows parents that their children’s potential is recognised and valued. The Olympic Park’s legacy extends far beyond elite sport performance.

“Panathlon brings in children with SEND from far beyond the confines of London, ensuring the 2012 legacy of GLL venues extends into other areas of the country. We look forward to developing our swimming programmes even further with the team at the Aquatic Centre in the year ahead.”

Panathlon has been hailed as “summing up what the Olympic and Paralympic legacy is all about” by the manager of the London 2012 Aquatics Centre and Copper Box Arena venues.