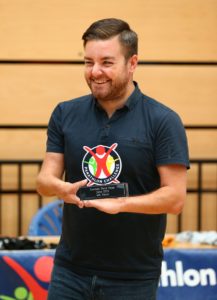 Channel 4 star Alex Brooker, who co-hosts award-winning show The Last Leg, has been a Panathlon patron since 2013.

The presenter, who rose to fame as a reporter for Channel 4 at the 2012 London Paralympic Games, won £25,000 for Panathlon on a celebrity edition of ITV show The Chase in September 2014.

He has visited various Panathlon finals, meeting competitors, awarding medals and trying out a number of Panathlon sports.

At a recent final at the Copper Box, Alex also helped to make a promotional film for Panathlon, where he outlined the reasons for supporting the charity.

“As soon as I found out about Panathlon I wanted to be involved, because when I was in school there was nothing like this about for me and other disabled kids. There was no big, inclusive event – not only that, but a proper competition!”

“When I was at school, there was nothing like this for disabled kids. Even today, without Panathlon some of these kids wouldn’t get involved in sport and that is completely wrong.

“But they aren’t just here to have fun; this is a competition and they want to win. If there is anything that demonstrates an Olympic and Paralympic legacy, it’s this.”

Alex, who was born without a fibula and with hand and arm abnormalities, won a Channel 4 talent search in March 2012, before reporting at the Paralympics opening ceremony, where he interviewed Prime Minister David Cameron and Mayor of London Boris Johnson in front of a TV audience of 11 million people.

The 2012 Paralympic Games went on to become a huge success and helped to raise awareness of disability sport in the UK, although Brooker believes that there is still plenty more that can be done at grassroots level.

“The Paralympics did a lot because a lot more people have now seen disability, but the Paralympics is such a high level. Just because you’re disabled and you’re not good enough to be a Paralympian, it doesn’t mean that you shouldn’t be able to do a lot of sport.

“That’s what I love about Panathlon and that’s why it’s so important. There is so much adaptive sport and everyone can do it. It’s good fun, but there’s a competitive element to it too. I love that because I’m really competitive. Just because you’re disabled doesn’t mean you can’t be competitive. I love that there’s both sides to it.”

In September 2014, Alex appeared on a celebrity edition of ITV’s The Chase, in which he won £25,000 for Panathlon – an achievement for which everyone at the charity is very grateful and one that will make a huge difference to lots of disabled children.

Having spent the day at a London Panathlon final – after his first visit to the 2013 final at Westway Sports Centre – Alex was certain that the money had gone to the right place.

“It’s amazing that Panathlon are hosting such a big final here in the Copper Box Arena, an Olympic venue, with so many kids. It just shows how far the charity has come and is testament to the hard work of everyone involved. It’s really gone from strength to strength.

“I was very happy to win a bit of money for Panathlon on The Chase. They deserve it more than anyone. No-one else is doing anything like this. There is no other organisation that puts on something this inclusive and this competitive. It’s unique and they deserve as much funding as possible.”