Triple Paralympian Team Helen Turner has been a Panathlon patron since 2009.

Helen, who plays wheelchair basketball for the London Titans, retired from international sport in 2014 having represented Great Britain at the last three Paralympic Games, as well as the World Championships and European Championships, where she won six bronze medals since her first appearance in 2003.

Since becoming a Panathlon patron, Helen has attended numerous competitions in London, Kent, Essex and her native Surrey, where she most recently visited the inaugural Panathlon South Final – part of a new series of ‘best of the best’ Panathlon regional finals that raises the standard for all participants. 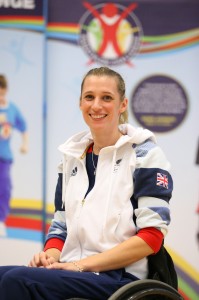 “I always enjoy Panathlon,” said Helen at the event.“The kids love it and it’s always fun, but it’s not just about playing games. It’s about competing for your school against another school. The kids feel proud about that and want to do well. Plus at these regional finals they are representing their county, which is great!

“It’s the competitive side that makes it. All the kids get to compete and to improve themselves and that’s what Panathlon does.

“All of the teams here want to win. Some of the games need a lot of concentration so it can get quite quiet, but it all comes to life with the relay races.”

Helen, who broke her back when she was 20, competed all over the world at the highest level for Team GB for over a decade, making her an ideal patron for the Panathlon Challenge and an inspiration to those competitors who get to meet her.

“It’s great that Panathlon provides opportunities for these kids to take part in sport,” she added.“Before my accident I saw sport as a right and I played it whenever i could, so why shouldn’t every kid be able to play it. You get so much from sport, so every kid should have that chance.

“It’s lovely to be here as an ambassador and to be seen as a role model to these kids.” 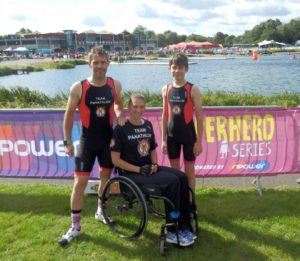 Alongside this, Helen, along with Son and Husband, have twice now competed for Panathlon as Team Turner at the Superhero Triathlon Series, read the full story here.

Watch Helen interview Malik Berbiche from the Hillingdon Panathlon team in the video above.