Our Panathlon Ambassador is triple Paralympic medallist Liz Johnson. Liz became a Panathlon patron in 2010 and, since then, has attended dozens of competitions around the country, inspiring a new generation of athletes.

Liz, a 100m breaststroke S6 swimmer, won the gold medal at the Beijing Paralympic Games in 2008, to add to her silver medal from Athens 2004. She then went on to complete a hatrick of medals in front of a home crowd at London 2012, where she won bronze.

The swimmer also took the Paralympic Oath at the Opening Ceremony of the London 2012 Games in front of 80,000 spectators and a TV audience of tens of millions (see video above). 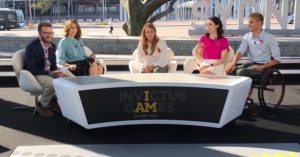 Since retiring from her international swimming career Liz has commentated at the World Para Swimming European Championships and presented at the 2018 Invictus Games in Sydney. Alongside this, launching her recruitment company The Ability People, staffed exclusively by people with impairments, to challenge stereotypes about the role those living with disabilities can play in the job market.

Liz was instrumental in the introduction of swimming to the Panathlon programme in 2013 and has remained so during its growth since. Now Panathlon provides swimming opportunities to approximately 2,000 young people with disabilities and special needs  – 35% of whom enjoyed being in a pool for the first time at events held right across the country, including many finals at the London 2012 Aquatic Centre. 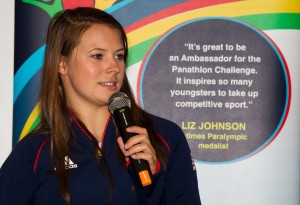 Liz said: “It’s great to be a Panathlon ambassador. I always love to come to Panathlon events and I love what they achieve with young disabled children, many of whom get no other competitive sporting experience other than with Panathlon.

“Sport teaches everybody so much. You’ll find some people arrive at Panathlon competitions quite introverted, but they’ll leave as the captain of their group. Panathlon makes it accessible for these children to obtain those kind of skills and gives them opportunities they wouldn’t otherwise get.”

“It is also great that,  Panathlon hold Primary, Secondary and swimming finals in the Olympic Park. This gives the pupils something extra to aim for and I’m sure it stirred the emotions in them as it did for us making it to the Olympics and Paralympics.

“As an elite athlete you strive for the pinnacle and, by using these incredible venues for our biggest competitions, I think we’re getting as close as we can to replicating the emotions that we would go through for these guys.

“This demonstrates how far Panathlon has come in just a few years and there are lots of exciting times ahead. It’s great to be part of Panathlon and I look forward to being involved as it continues to grow, helping more and more young disabled people get involved in sport.”

See Liz in our latest Panathlon video on a record breaking year!