Panathlon sporting patron and double Paralympian Louise Sugden has recently had a change in career path.

Part of the GB Wheelchair Basketball team since 2003, Louise has won five European Championship bronze medals and has represented Great Britain at the 2008 Beijing Paralympics and the “once-in-a-lifetime experience” of London 2012.

However, her latest adventure has been with the Great Britain Para-Powerlifting team at World Championships, Commonwealth Games, European Championships and World Cups!  “I’m absolutely loving the challenges of a new sport and the incredibly steep learning curve”, said Louise who lifted 96kg finishing 10th place overall in her first World Championships!

It wasn’t long however before she was crowned European Champion in May 2019 with a lift of 108kg.

Since then she has developed further and in Manchester in February 2020 at the Manchester World Cup, she went on to lift 120kg, 123kg & 125kg with 8 out of 9 white lights. This earned her a GOLD medal for the first time at this level in her ‘new’ sport.

“To represent Great Britain in one sport is a real honour, so you can imagine I am doubly delighted to do it twice,” said Louise after her latest World Cup performance. 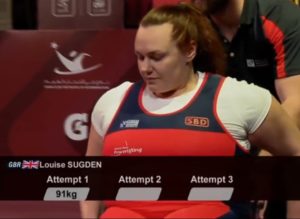 The 35-year-old has been a regular at Panathlon competitions in recent years and enjoys watching children with disabilities getting to compete on a level playing field.

Having experienced PE lessons in her wheelchair surrounded by able-bodied children while at school herself, Louise understands the importance of providing inclusive sport for young disabled people.

“You can get disheartened if you’re playing against people who are running around and you’re not doing very well,” said Louise. “The fact that these kids are all playing on a level playing field is so crucial, because it helps them realise what they can do.

“I took part in a similar event when I was growing up and it was the highlight of my year. That’s when I started to realise my competitiveness. It was the beginning of my journey into Paralympic sport.

“The whole legacy thing is important, which is why I come to events like Panathlon and do anything I can to inspire as many kids as possible. I just love the thought of someone saying: ‘I can achieve stuff because she has.’”

Panathlon aims to create a legacy of its own at grassroots level, but there is always the chance that someone involved at an event will be inspired to bigger and better things, and perhaps one day achieve the same heights as this Paralympian.

Louise competed at the Commonwealth Games in 2018 – a mere 9 months after taking up the sport. Three good lifts of 97kg, 101kg & 103kg saw the new comer take Silver on the Gold Coast by just 0.2 points!

Fully motivated by the success in her new sport, she looks on to her next Paralympics in 2021 in Tokyo. You can find out more about Louise and read her blog at louisesugden.co.uk