Priory School from Bury St Edmunds will be looking to make it three victories in a row as they return to the Aquatics Centre in the Queen Elizabeth II Olympic Park for the Panathlon South of England Swimming Finals.

Priory qualified for the end-of-year showpiece at the iconic 2012 Olympic and Paralympic Games venue on July 6 having seen off competition from four other schools at the Suffolk Swimming Final in February.

Jane Chave, lead teacher for PE at the school, said: “Priory School consider it a huge honour to be representing the county again at the Finals. We never fail to be impressed with the atmosphere generated at the Olympic Pool as it provides an amazing setting for the competition and the athletes.

“We approached this year’s Suffolk Finals earlier in the year with a bit of trepidation as nearly all of this year’s team is new. Our previous team had been together for three years and generated so much success in this competition.

“The success of previous years has created strong competition for places on this year’s team and many students aspire to represent the school at Panathlon. This year many have gone outside of school for lessons to achieve this aim.

“Parents have also commented on the huge difference they have noticed in their child’s self-esteem and self-worth after getting selected and competing for the school in this event.

“Whilst we as a school are excited about the upcoming finals day in July, we know that the competition is going to be very strong and whilst hopeful that we have a chance of winning, we acknowledge that retaining the trophy gets harder and it will be very difficult.

“With strong team work, we hope we can be a formidable contender again, whilst not losing sight of the fact that this will be very hard this year.”

One of the teams aiming to foil Priory’s quest for a third straight win will be John Watson School from Oxford, who qualified for the Final by winning the Home Counties qualifier.

Kevin Larsen, Team Manager of the first-time finalists, commented: “Students at John Watson School have been training weekly in preparation for this event. Their confidence in the water and their swimming ability have improved immeasurably over the period of time.

“They have worked hard as individuals and have come together as a team. Achieving a measure of success has been a great source of motivation resulting in more students wanting to become involved.

“School assemblies have raised the profile of the event and more students throughout the school have shown a willingness to improve their swimming ability. The winning of course is in the participation but to participate and win has improved the self-confidence and esteem of our students.”

Alison Day, Lead Teacher of fellow first-time finalists, Henlow Church of England Academy, from Bedfordshire, said: “Myself and the children are very, very excited to have the opportunity to swim in the finals. The thought of swimming in the Olympic pool is amazing.

“One of our students Katelyn said: ‘Really? We’re really going? Wow! Thank you, thank you, thank you!’ Tabby said: ‘What me? I’m going to be swimming in the Olympic pool?’  Adam just said: ‘Wow!’. Samuel and Libby both said: ‘What, me?’ and then screamed. Megan shouted: ‘Yes! I’m so excited.’

“For myself, personally, I am so very proud of our pupils. The looks on their faces when I told them the news was priceless. Lucas had such a huge smile on his face. Thank you Panathlon for giving our pupils this fantastic opportunity.” 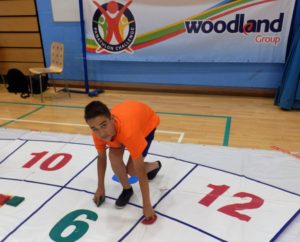 Thierry Higgins (pictured left) was part of Treetops School’s team when they won the Essex Final to seal their debut appearance in the South of England Final. He said: “I think going to the Swimming Finals is incredible. We can participate with other schools and see how good we are.

“We can just try our best to win, but it is about taking part and  myself and my team-mates have worked to get this far and I’m feeling proud to represent the school, and to make history with Treetops School.”