Priory School in Bury have been crowned Panathlon’s first ever south east swim champions, after they won a thrilling regional swim final at the London Aquatics Centre in the Olympic Park.

The South Suffolk team won the East of England swim final and were crowned overall Panathlon south east swim champions, beating Trinity School from Barking & Dagenham, who won the London final, thanks to a faster overall time over nine events.

The winning teams were among more than 50 children from across London and the south east to compete at the iconic London 2012 venue, before receiving their medals from Paralympic champion Liz Johnson.

Jane Chave, PE teacher at Priory School, said: “It’s amazing. We didn’t think we could do it, we had no expectations of winning and we had no idea right until the last moment when they announced it, so that was lovely. It’s just amazing.

“It’s just awesome to be at an Olympic venue and for the children to get a chance to compete at the same venue as Olympians makes it so special. We came down early as we wanted to soak up the atmosphere and we even got to see Tom Daley practice his diving. You can’t get much better than that!

“We also had a whole supporters’ coach come down here to watch it today, because they wanted to see our school compete at an Olympic venue. That was just awesome for us.” 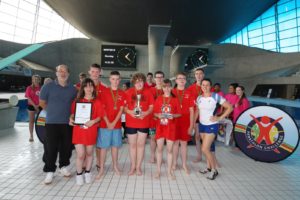 Rhys Turnbull (pictured at top of page), a Year 10 student at Priory School, said: “It’s amazing. Not many people get to compete somewhere like this. It’s really good.”

The finals were the new highlight of the Panthalon swim programme, bringing together qualifiers from regional heats across London and the east of England.

Priory School (pictured right), who were representing South Suffolk, beat North Suffolk’s The Ashley School from Lowestoft into second place, ahead of Colchester’s Doucecroft School and Market Field School, both representing Essex, to claim the East of England title.

The London final brought together the winners of four London regional finals, with Trinity School, representing Barking & Dagenham, putting in a strong performance to be crowned London champions.

Sam Stevens, sports coach at Trinity, said: “It’s brilliant. It’s the best event we’ve been too so far. It’s a brilliant atmosphere and it’s been a really good competition. The kids have really enjoyed it. It means a lot to them and there will be a big celebration when they get back to school.

“If you’d seen where these kids have come from, it’s incredible, especially one of the boys. This time last year he was terrified of water, and now he’s come and competed here. I’m really proud of him.”

Trinity student James Cole (pictured below), aged 16, said: “It’s fantastic. We’ve trained so hard throughout the year for this. I’m so happy. And Tom Daley dived in this same pool. It’s absolutely fantastic.” 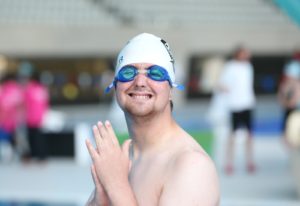 Unfortunately west London champions Ealing were unable to make it on the day.

This is the first event that Panathlon has hosted at the London Aquatics Centre, following hot on the heels of Panathlon’s multi-sport London finals, which took place in June in the neighbouring Copper Box Arena – another iconic London 2012 venue – for the second consecutive year.

Paralympic swimming champion and Panathlon ambassador Liz Johnson, who won breaststroke medals in each of the last three Paralympic Games, including bronze in the Aquatics Centre in 2012, spent the day in the water with the competitors and then presented medals to each of the teams.

“It was a fantastic day at a brilliant venue,” said Liz. “It was very exciting, there were lots of people here and the venue was perfect. To have the opportunity use the Olympic Park and the venues within it adds that extra special buzz for the children and they can relate to what they saw on the TV and the excitement that we got from being in here at the Olympics and Paralympics.

“To be here in the Aquatics Centre and it’s Panathlon’s first ever regional swim final, I think shows how much Panathlon is growing and the numbers were huge here today. There was lots of room, so no-one was swimming on top of each other and there were some very good swimmers in the pool.” 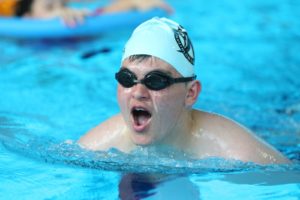 It has already seen over 1,000 disabled children across 22 London boroughs and eight counties nationwide take to the water in its fun competitions, 25 percent of them for the first time.

The programme’s first ever regional swim finals were made possible by the support of John Lewis Stratford City, the Wembley National Stadium Trust, the Jack Petchey Foundation, The Mason Trust, Active Essex and the Emma Holloway Foundation.

Stewart Goshawk, chief executive of the Wembley National Stadium Trust, said: “It’s been a brilliant day. The chance for these guys to not just come in here, not just to swim in here, but to compete in here, in the same venue that Tom Daley and Rebecca Addlington were in, is absolutely fantastic.

“They want proper competition and that’s what they’ve got here. You can see the enjoyment that everyone has. It’s just brilliant.”

The finals were overseen by students from Great Baddow School in Chelmsford and Ellen Wilkinson School in Ealing, who are among over 1,350 young leaders trained by Panathlon to act as sports officials at Panathlon competitions.

The event, facilitated by the young leaders both in and out of the water, ran incredibly smoothly, so thanks to all concerned!